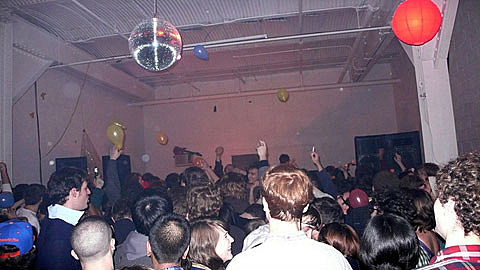 "Hello friends. Happy New Year to all. I hope that it is a healthy and prosperous one for you all, thus far. We were fortunate enough to ring in our new year on a positive note with all of our old Jersey buddies this past Friday night - thanks to all of you who came out to that show, and our sincerest apologies to those who had their belongings tampered with or carried off by unseen malefactors. There is some lesson here about personal responsibility and looking after the good of the community, but I will leave it to you to decode - smart kids like you shouldn't have too much trouble.

If you were at the show, you also maybe heard me saying something about how it was our dearly beloved bassist Ian Graetzer's last show with the band. Well, the reason that I said that was that it was true - Ian isn't in the band anymore. Shocking, I know, considering that Ian has been in the band since the very beginning (in fact, he and I were the two guys who decided to form the group) and been present for every glorious victory, every bitter defeat, and all the innumerable, interminable hours in between. Not anymore, gang.

"What is the deal?" you may be asking, "Do you guys, like, hate each other now or something?" No, we don't hate each other. In fact, the months since Ian announced his departure plans (yes, the months!) have been some of the happiest and friendliest in all of our organization's history..." [Patrick Stickles]

As already discussed, Titus Andronicus played a sold out New Years Eve show at 285 Kent in Brooklyn. That's a picture of the festivities above. Was your stuff stolen?

UPDATE: Or did you just leave it behind?

Titus's next NYC show will also definitely sell out. That's because it's taking place at Mercury Lounge. Tickets for the February 10th Willie Mae Rock Camp For Girls benefit are on sale. No word on who will be playing bass. All Titus dates below...