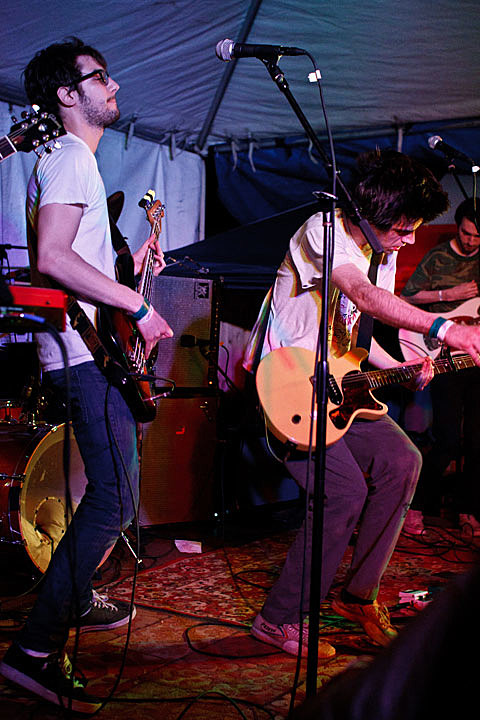 While the first two albums were elaborate concoctions, Local Business is of the earth. Titus Andronicus the studious recording project and Titus Andronicus the raucous touring machine are no longer two distinct beings; there is only Titus Andronicus, rock and roll band. This is to say, it was recorded primarily live with precious few overdubs, with an elite squad of musicians.

This should come as good news for those who thought The Monitor went too far away from the band's punk roots. Meanwhile, they did bring in Owen Pallett to contribute violin and still have song titles like, "Titus Andronicus VS. The Absurd Universe (3rd Round KO)."

We heard one of the songs, "Upon Viewing Oregon's Landscape With The Flood Of Detritus," back in February when it premiered on WFMU. That track was since released on a split 7" with Diarrhea Planet and you can listen to it HERE. Some recent live videos of other new songs and the Local Business tracklist are below.

Titus will support the new album with a tour which hasn't been announced yet, but before then they'll play a free NYC show at House of Vans on August 16 with Cursive (who also have an upcoming tour with Minus the Bear), Love As Laughter, and Joyce Manor (who also play Acheron that same night [8/16]). RSVP is required.

The only other announced date for Titus at the moment is Fun Fun Fun Fest. Videos and tracklist are below.

Titus Andronicus - "(I Am The) Electric Man" live

Local Business Tracklist:
1. Ecce Homo
2. Still Life With Hot Deuce And Silver Platter
3. Upon Viewing Oregon's Landscape With The Flood Of Detritus
4. Food Fight!
5. My Eating Disorder
6. Titus Andronicus VS. The Absurd Universe (3rd Round KO)
7. In A Big City
8. In A Small Body
9. (I Am The) Electric Man
10. Tried To Quit Smoking