"If my resolution for 2013 had been to eat shrooms, rage in a mosh pit and lose my voice at a @titus_ndronicus show, I'd be done already." - @THEmikewhite

"So many scratches on my body that I look like I was attacked by a werewolf, so I guess last nights concert was fuckin dope @titus_ndronicus" - Dimitri Belkin

"almost 24 hours later and my neck is insanely sore from the @titus_ndronicus #NYE pit. one of the most fun nights of my life" - Travis Yablon

Titus Andronicus at Glasslands on NYE (via Alex Vasquez) 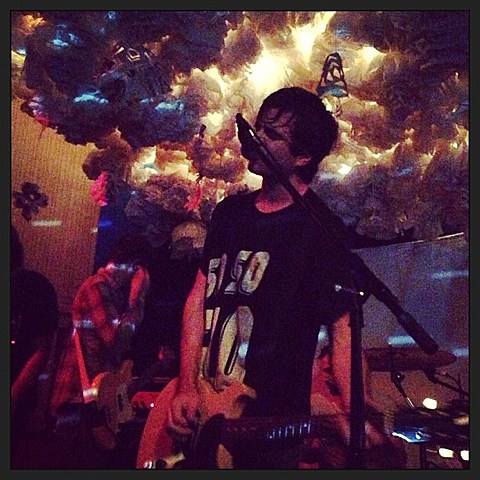 Titus Andronicus rang in the new year in Brooklyn at Glasslands for a Dapwell-hosted show. Titus went on after midnight after sets by Baked and Cosmonaut. They played a wild set with favorites from all three Titus albums and then finished the set off with a run of covers -- Thin Lizzy's "The Boys are Back in Town," The Rolling Stones' "Brown Sugar," and The Modern Lovers' "Roadrunner." The full setlist is below.

Titus frontman Patrick Stickles also just spoke to Pitchfork about his "TOP FIVE RECORD COMPANY FAILS OF 2012" aka his five favorite "Self-released records and unsigned giants," which you can see listed below in alphabetical order. The list includes three of Patrick's Brooklyn neighbors, The So So Glos, Bad Credit No Credit, and Hard Nips (who play Shea Stadium on January 10 with Desert Sharks, Heliotropes, and Hippy). It also includes Boston's Hallelujah the Hills, who play Brooklyn on February 24 at The Rock Shop with Zachary Cale and Woodsy Pride. Patrick's full list with commentary and a list of all Hard Nips dates are below.

FREE ENERGY - LOVE SIGN: The best pop rock record of 1988 finally arrives - the world awaits the launch of their own record company.

HALLELUJAH THE HILLS - NO ONE KNOWS WHAT HAPPENS NEXT: Nineties indie rock is alive and wordier than ever and also on Kickstarter.

HARD NIPS - AMAZING GUNS: Three Japanese expatriates reveal to us that the most relevant rock band is AC/DC, except that they needed more phaser.

THE SO SO GLOS - BLOWOUT: A band of Brooklyn brothers bring old school pop punk into the twenty first century, producing a flawless classic in the process.

--
Titus Andronicus at Glasslands - 12/31/12 Setlist
A More Perfect Union
Joset of Nazareth's Blues
Richard II
Ecce Homo
Still Life with Hot Deuce and Silver Platter
Fear and Loathing in Mahwah, NJ
(I've Got A) Date Tonight
In A Big City
Upon Viewing Oregon's Landscape with the Flood of Detritus
No Future Part One
No Future Part Three
Titus Andronicus
The Battle of Hampton Roads
Titus Andronicus Forever
The Boys Are Back In Town (Thin Lizzy)
Brown Sugar (The Rolling Stones)
Roadrunner (The Modern Lovers)