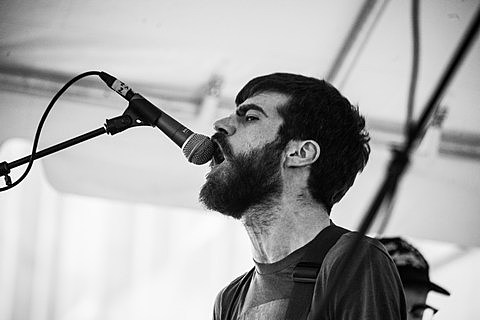 Titus Andronicus have been talking about their new rock opera for a while now, and though we still don't have many details on that, they did announce a new 7" series in a recent online press conference. There, Patrick Stickles talked about the number seven and noted that they've released seven 7"s in seven years, the first release in their new series will be a reissue of their first one, 2007's "Titus Andronicus" b/w "Fear And Loathing In Mahwah, New Jersey" and it comes out on on 7/7.

Also on July 7, the band will play a very intimate release show at 7 PM at Brooklyn's Shea Stadium. That show is sold out, but you can still get in if you subscribe to the 7" series.

The show is with Wicked Kind, who feature members of Titus Andronicus and Lost Boy?, and whose song "Sport" is on the b-side of the first 7" in the series to feature new material. The a-side of that one has a new song from Titus, "Stranded (On My Own)." You can stream both sides of that one below.

Titus also have other upcoming dates including a free Brooklyn Night Bazaar show on July 11 with Beach Slang, Lost Boy? and others, and a Webster Hall show in September with Buzzcocks.

Lost Boy? are also releasing a new album, Canned, on August 5 via Double Double Whammy (home of Frankie Cosmos and ex-Titus member Liam Betson), which follows their May EP on Exploding In Sound. Stream a track from that album, with the streams of the new Titus/Wicked Kind 7" and the press conference video, below...

Titus Andronicus - "Stranded (On My Own)"