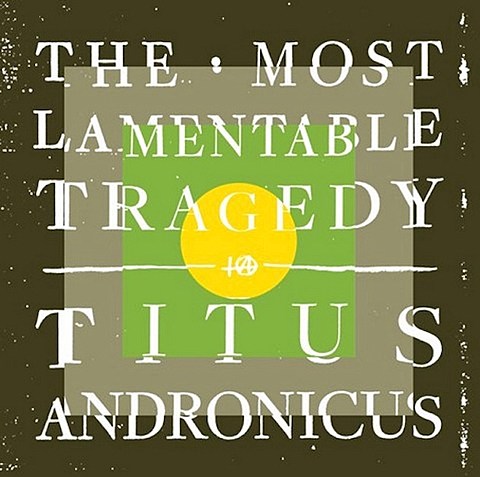 Titus Andronicus' 29-song, hour-and-a-half-plus punk rock opera The Most Lamentable Tragedy comes out 7/28 via new label home Merge, and now the whole massive thing is here to stream. As you've probably guessed, there's a lot to take in here. Sometimes it's just a great punk song like lead single "Dimed Out." Other times it's colossal over-nine-minute prog rock adventures like "More Perfect Union" or "(S)HE SAID / (S)HE SAID" which sound like a garage rock band taking on Jethro Tull's Aqualung, or The Decemberists' The Hazards of Love.

The latter of those songs is introduced by an a cappella rendition of the traditional Catholic hymn, "Glory to God in the highest." "Forever" has Patrick playing off The Beach Boys' Dennis Wilson-penned "Forever" (and presumably intentionally singing off-key). What I'm pretty sure are bagpipes on "More Perfect Union" could be right off a Pogues album, and later in the album they literally cover that band's "A Pair of Brown Eyes." "I'm Going Insane ( Finish Him )" reprises Local Business' "Titus Andronicus vs. The Absurd Universe (3rd Round KO)." Interludes and intermissions are sprinkled throughout the album, and it starts and ends with almost the same thing. Again, it's a lot to take in. You can now do so below, via NPR.

TItus' tour hits NYC from July 24-28 at Shea Stadium (all sold out) and then again on October 16 at Warsaw with Ex Hex and Spider Bags (tickets).