Titus at Shea (photo via doNYC) 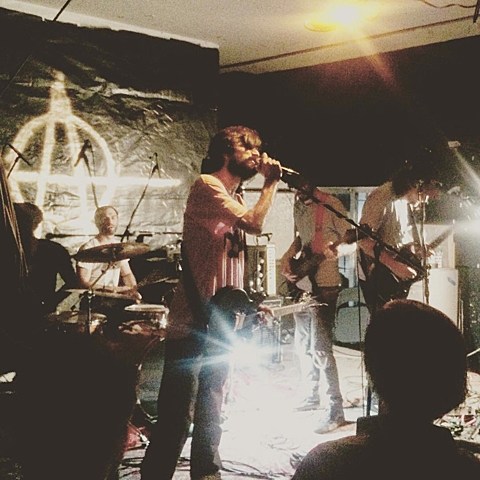 Titus Andronicus may continue to increase in popularity and ambition, but the spirit of their band seems to actually get closer to their punk/DIY roots. Their newest album is the hour-and-a-half, 29-song song rock opera The Most Lamentable Tragedy, but it's got the rawest production since their debut and some of these songs could've been on late '80s Epitaph or Lookout! releases without anyone raising an eyebrow. So it makes sense that they'd celebrate the album at a Brooklyn DIY venue that normally hosts bands who play places like that out of necessity. Of course it makes even more sense that the venue in question would be Shea Stadium, which current Titus guitarist Adam Reich is a co-founder of and where several Titus members (including Patrick Stickles) work. And it makes even more sense that they'd do it over the course of five nights, all of which sold out well in advance.

They fancied the place up a bit for these shows too. They put up a screen next to the stage that projected the band's performance, the stage was covered by a curtain that dropped right before their set, and the backdrop of the stage was painted with Titus's "+@" logo. (If only they could've also installed air conditioning.) Those embellishments aside though, Shea was basically the same place it is any other night, and it was clear that that's the kind of place Titus are meant to play. It was the best I've seen them in a while.

They opened with "Fear And Loathing In Mahwah, NJ" and went right into "A More Perfect Union," and as you'd probably expect, the whole place was a massive blob of people bopping around and going nuts. There was no opener and Titus played for maybe two hours, hitting tons of favorites from all over the discography. We got "No Future Part Three," "A Pot In Which To Piss," "Still Life With Hot Deuce On Silver Platter," "Dimed Out," "Fatal Flaw," and plenty more. I don't remember the exact setlist, but I also don't remembering feeling like there was anything I was dying to hear that they didn't play. When they played "Joset of Nazareth's Blues" off the first album, they brought out Ian Dykstra, who drummed on that album and who Patrick called "the second original drummer of Titus Andronicus." The band seemed like they were having a great time, and they had fun with it too. They worked little jokes into the set (musically and during stage banter -- it seemed like they may have taken a jab or two at the Pitchfork review of their new album that they were tweeting about yesterday). And Patrick turned 30 at midnight, which he made reference to throughout the night.

"It was fun being dimed out in my 20s, but now I'm in my 30s and it's time to... take it easy," he said to introduce a cover of The Eagles' "Take It Easy," the first of three covers to end the night. After that came John Mellencamp's "Hurts So Good," and like they did at Warsaw last year, they wrapped up with Semisonic's "Closing Time."

The run of Shea shows concludes tonight (7/28), and Titus play NYC again at the larger Warsaw on October 16 with their Merge labelmates Ex Hex and Spider Bags. Tickets are still available.

Check out a short video of "Still Life with Hot Deuce on Silver Platter" from the first night of the run, below...