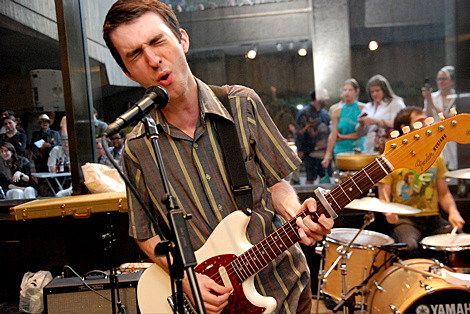 The art of Losing: You pay a lot of "homage" (for lack of a better word) to your hometown of Glen Rock. Suburbia is a lot different in Texas than the Northeast, or so I thought until I watched the video of the Streets of Glen Rock on your blog. But nonetheless, can you describe a little bit about New Jersey and how exactly it shaped you guys?

Patrick from Titus Andronicus: "Well, New Jersey kind of instills in it's residence that sort of underdog spirit. Just because so much of the identity of New Jersey is based around the flack that New Jersey receives from internal and external forces. When you tell people that you're from New Jersey, it's just like a big joke to most of America. They think that we smell bad and that we are all stupid. And even so much of the best art that has come out of New Jersey is about trying to get away. Like, Bruce Springsteen in particular. There was even a time, in New Jersey when they were campaigning to get "Born to Run" to be the official state song... which is sort of ridiculous in that it is about how hopeless New Jersey is... I mean, I love New Jersey. It is definitely very special to me... People from New Jersey have always got something to prove, know what I'm saying?"

NJ's Titus Andronicus are teaming up with the So So Glos for a fall North American tour that begins and ends in Brooklyn. The tour kicks off on September 2nd at Monster Island Basement, and closes on October 15th with a show at the new Knitting Factory in Brooklyn, which means that venue should be open by then. On September 19th they play a show in Portland that is part of Music Fest NW. On October 14th they play a show at Maxwell's in Hoboken. Tickets for that NJ one are on sale.

The So So Glos have a couple NY gigs beforehand, including an August 1st show that wraps up the summer North American tour of UK band Lovvers. Also on the bill are The Sundelles, Babies and That Ghost. You can also catch them tonight (7/28) at the Delancey.

Titus recently played a show at the Whitney museum. That honor goes to the Vivian Girls and These are Powers this Friday (7/31).

All Titus/So So tour dates below...