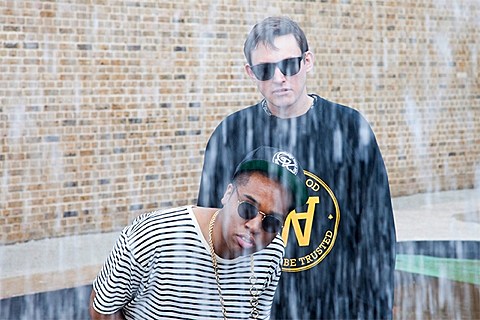 Hip hop production duo TNGHT (aka Hudson Mohawke and Lunice) is quickly becoming larger than the sum of its parts, and after playing Music Hall of Williamsburg in November (one of three international shows that month), TNGHT have announced their return to NYC, which will happen at the larger Webster Hall on April 17, in between their sets at this year's Coachellas. It's one of a few upcoming dates for TNGHT scheduled at the moment, including a just-announced slot at Barcelona's Sonar Festival. Tickets for the Webster Hall show go on sale Friday (2/15) at noon with an AmEx presale starting Wednesday (2/13) at noon. All currently known TNGHT dates are listed below.

At TNGHT's last NYC show, Kanye West came out on stage with them as they dropped his track, "Cold." Following that appearance, and the fact that TNGHT member Hudson Mohawke contributed production to Kanye's Cruel Summer album, it's maybe not so surprising to learn that Hudson Mohawke has signed to Very GOOD Beats, the production component of Kanye's G.O.O.D. Music label (he will also keep his pre-existing contract with Warp). The other half of TNGHT, Lunice, also recently posted a mix (via Pigeons & Planes) that features TNGHT's remix of G.O.O.D. Music's "Clique." And, TNGHT have shared their new-ish track, "R U Ready," which Kanye was heard playing at a Victoria's Secret party during Fashion Week 2012. You can stream that track and Lunice's mix below. Why G.O.O.D. Music didn't just sign TNGHT instead of only Hudson Mohawke? Don't question Kanye West.

All streams and a list of all currently known dates below...