To Kill A Petty Bourgeoisie 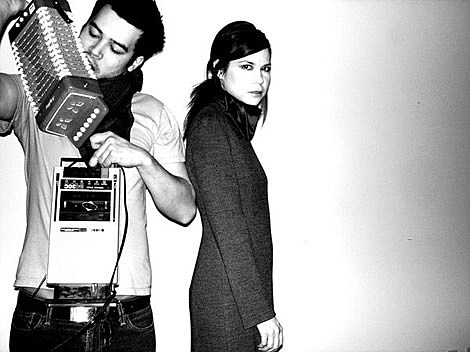 To Kill a Petty Bourgeoisie consists of Jehna Wilhelm, guitar and vocals, and Mark McGee, electronics and sound manipulation. Originally from Richmond, VA, the duo has been involved with this project for 4 years and has been supported by an ever-changing cast of players and musicians. They now reside in Minneapolis, MN where they run their own label, The Riley Bushman Recordings & Archives, which they use as an outlet to release various projects and collaborations. [Kranky]

Kranky label-mates To Kill A Petty Bourgeoisie and Boduf Songs (aka Mat Sweet, who lives in Southampton England) are going on a tour together that kicks off at this weekend's Brainwaves Festival in Boston.

"Capping the weekend is a day-long tribute to Kranky, celebrating the 15th anniversary of the label, which is home to avant-garde rockers like Deerhunter and ambient pioneers Stars of the Lid. "For Kranky, we've got a whole day planned. Windy [of Windy & Carl] and Thomas Meluch [of Benoit Pioulard] will perform together," he says. "Stars of the Lid will headline, Lichens, Nudge and Strategy will leave the crowd stunned, and we'll get a rare glimpse of To Kill a Petty Bourgeoisie and Boduf Songs live. Unfortunately we failed to pull off Out Hud, Labradford, Godspeed You Black Emperor and Bowery Electric reunions, but we did try."" [Weekly Dig]

NYC can also get a rare glimpse of TKAPB and Boduf live, TWICE. The first show is Tuesday, November 25th at Pianos. The next one is that Friday in the same LES neighborhood, at The Annex. All dates below...