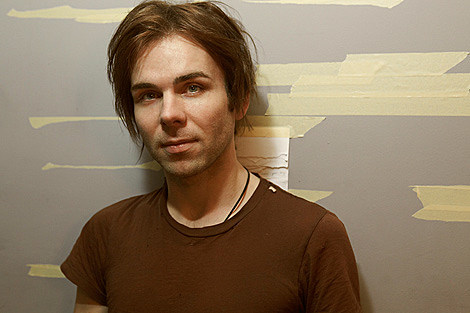 Toby Driver is an "other". Not like Benjamin Linus or one of the Dharma Initiative, but in that his artistic endeavors Kayo Dot and Maudlin of The Well exist in the in-between, and outside. Driver's current project, Kayo Dot, is prepping to release their fourth album Coyote via Hydra Head on April 6th. On Coyote, elements of goth, avant-jazz, prog, ambient, and the kitchen sink meld with the avant-garde, making for an intensely fascinating and eclectic listen.

Driver was recently asked to curate the month of February at The Stone, John Zorn's non-profit club in the East Village. We sat down to ask Driver about some of the bands he chose which include solo sets from members of Krallice, Dysrhythmia, Extra Life, and Bloody Panda in addition to Baby Dee, Oxbow, Gnaw, and a full performance by his own band doing Coyote from start to finish, and the recent resurrection of Maudlin of The Well.

Full interview and Stone schedule, below....

BV: Kayo Dot is very expansive with multiple different directional shifts and styles, and Coyote definitely has moments where I am reminded of Scott Walker and Goblin, along with some avant-jazz stylings. What is your current musical inspiration going into this project?

Toby Driver: On this one, I wanted to use the aesthetic of 80's art-goth electric bass - bridge picking, lots of chorus, and frequent use of the open G string - in the context of modern-composition as opposed to straight-up riffs. The two main bands that influenced my perception of that sound were The Cure and Faith And The Muse. Melodically, I was influenced by the amazing trumpet tone of local composer Tim Byrnes, the soprano sax playing of another of our local composers, Matthew Welch, and then the Mujician and/or Ornette sax/trumpet unison duets of the 60s. The dark Scott Walker you hear is definitely intentional, and I think the Goblin is just a result of the gear we used (Korg Poly6 in this case). I'm trying to reclaim goth for those of us who love the aesthetic but want something more sophisticated. We all were reading the Vertigo comic "House of Mystery" while in session, too. ha!? 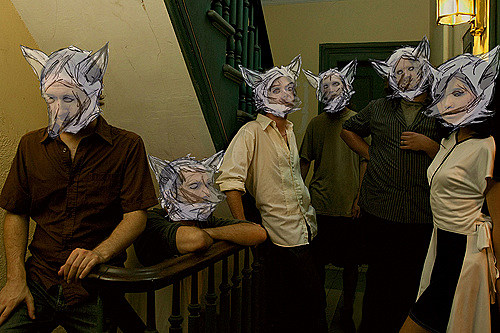 Who are some of the collaborators on Coyote, and how have they helped to shape the sound of the record?

TD: Firstly, Coyote marks the return of Terran Olson, who was in MOTW and also on Kayo Dot's 2003 debut. Terran has a great ability to find ways of fitting catchy and accessible melodies into my strange clumps of cat-spittled musical yarn. Then we also have Tim Byrnes guesting on trumpet, who played with Candiria and Friendly Bears, and is currently of Hazel-Rah. I normally hate trumpet, but Tim's sound is extra special, warm, and smooth, and as I mentioned above, his tone was one of the springboards for Coyote - I had wanted to write some music that used Tim's playing at the forefront. Finally, we also collaborated with Yuko Sueta, who contributed lyrics, whose style and atmosphere influenced the decision to inject Scott Walker & Rozz Williams into the vocals.

Your music is very forward-thinking, so it seemed almost out of character to reform a band that you had previously put to bed, Maudlin of The Well, for a new record. What was the inspiration behind that?

TD: Actually the purpose was specifically to put MOTW to bed. The record that we released in 2009 was made up of a lot of old material that had just been languishing for years. Additionally, making an album like Part The Second (the new Maudlin... album) is relatively relaxing and easy compared to making a Kayo Dot album, and is just a great source of fun for everyone involved. I'd be happy to do more albums like that at any time, if the funding were there.

Maudlin Of The Well 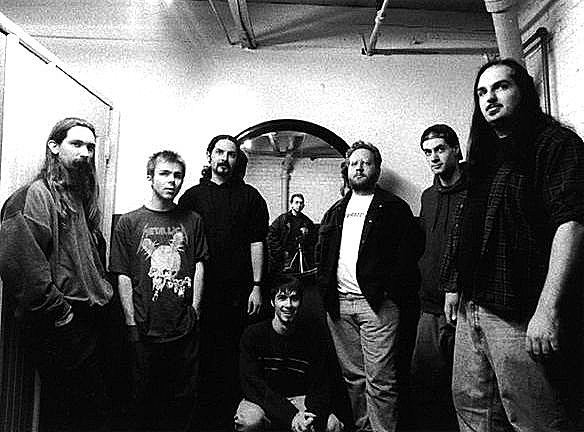 So you are curating The Stone for the month of February and have booked two luminary solo artists, Joe Preston and Mick Barr. What is your favorite Joe Preston project? What about Mick Barr project?

Can you discuss some of your favorite nights at The Stone in Feb?

TD: I think they're all going to be pretty spectacular, but the ones I would like to call special attention to are the nights on which the performers are traveling great distances just to present their music here in NYC. There is Lavigna, coming all the way from France. They're kind of like a semi-improvisatory noise/grind band, with some horns and a very tall male singer who dresses up in a princess outfit and screams. The vibe reminded me of the Providence band, Throne of Blood, but with horns. Then there's Sword of Exactly, from Indiana, whose music used to be like a combination of Yes, Megadeth, and Kate Bush, and has since become even more abstract - complex compositions, catchy tunes, amazing singer. Definitely my #1 favorite discovery that Kayo Dot had ever played with on the road. The infamous Oxbow (as a duo) will be playing an acoustic set, as well as performing music and words from Eugene Robinson's new book with members of PsychicTV. Perhaps the artist I'm most excited about is Steeve Hurdle, ex-Gorguts guitar genius from Montreal, who'll be playing a few sets - one solo, one with Craig Taborn, and one at the Valentine's Day improv night with myself, John Zorn, and others.

What was the inspiration behind playing Coyote and Choirs Of The Eye in it's entirety?

TD: I thought these two were the most relevant - Choirs of the Eye being a Tzadik release (and The Stone being Zorn's venue) and Coyote being the brand new one. And the reason for performing the records in their entirety like this is to express that Kayo Dot albums are always conceptualized as full pieces, experiences, not as separate songs, and that each CD is intended to be listened to as a whole, from beginning to end.

2/2 Tuesday (NY)
8 pm
Sugarlife
Christian Dautresme (vocals, etc.)
Sugarlife explores notions of performance art, identity, and sexuality with an entertaining and often absurd live performance interaction. It tends to be hilarious as well as scary. Whether charging the air with electronic blips or singing a celestial soprano over acoustic guitar blossoms, Sugarlife becomes a sonic shaman where change is the only constant. Neo-Fluxus freak out? Absurdist action art? The ghost of a soft G.G. Allin as a drag queen from a distant planet? Sugarlife transcends any movement classification.

MONDAY FEBRUARY 8-STONE SEMINAR 6
ELLIOTT SHARP-Music in the Post-Digital Era
7PM to 9PM-TWENTY DOLLARS: Open to all
Composer Elliott Sharp discusses and presents scores and audio examples of his work, past and current, in the context of biological and mathematical models of musical organization, an evaluation of computers and new media in performance, algorithmic composition vs improvisation, and the question of smell. Compositions to be discussed include the orchestral works "Larynx", "Calling" and "On Corlear's Hook"; selected string quartets including "Dispersion of Seeds", "Tessalation Row", and "Seize Seas Seeth Seen"; "SyndaKit", "Polymerae" and other algorithmic works; electroacoustic works such as "Cryptid Fragments"; solo approaches including Tectonics and Velocity of Hue; and the music-theater works "innosense", "EmPyre" and "Binibon".

2/9 Tuesday (NY)
8 pm
Jason Byron
Jason Byron (voice)
Former lyricist of Kayo Dot and maudlin of the Well Jason Byron, an Initiate of ______, offers a brief talk on modern ceremonial Magick, and will perform a personal ritual, with musical accompaniment. A once in a lifetime experience not to be missed!

10 pm
Jessica Pavone - Songs of Synastry and Solitude
Toomai String Quintet - John Popham (cello), Andrew Roitstein (bass), Emilie-Anne Gendron (violin), Erin Wight (viola)
Songs of Synastry and Solitude is a collection of songs for string quartet influenced by an interest in the simple beauty of folk songs, the ghosts of all things lost and Leonard Cohen's encouragement to live outside this world.

2/17 Wednesday (JM)
8 pm
Mind vs. Target!
Joseph Burkett (bass) Michael Libramento (drums) Shane Perlowin (guitar)
The music of Mind Vs Target ranges from rich harmonic textures to quick angular twists and turns, from delicate lyricism to cacophonous walls of sound... Though improvisation is prominent, with each member bringing his unique expression to a performance, much of the music is tightly composed and executed. And, though the direction of the group is largely rooted in the jazz avant-garde, other influences are strongly felt.

2/19 Friday (SK)
8 pm
Hazel-Rah and Fiver
Tim Byrnes (synth, voice, and horn) David Andrew Moore (drums) Charlie Looker (baritone guitar) Adam Minkoff (guitar)
Come spend an evening with the "beggar from the country of the LORD" as he presents some old and new compositions for small ensembles of synth, guitar, drums, voice, and horn in F. Tim has been in the city for more than 11 years now and has contributed to such exciting musical acts as Candiria, Friendly Bears, Kayo Dot, and Ron Anderson's PAK.

10 pm
Thrones
Joe Preston (bass, drum machines, synths, and voice)
Joe is a rock legend, having been a member of Earth, The Melvins, Men's Recovery Project, The Need, High on Fire, and Harvey Milk. Joe has also played with SunnO)). Thrones is his long-running solo project, featuring Joe on bass, drum machines, synths, and voice, combining all these things into terrifying and progressive sludge.

10 pm
Gxxxxn
Kxxa Sxxxo (vocal, guitar, mandolin) Txxxxxxxxi Kxxxxa (guitar, percussion) Rxxxxxe Txxxxxo (drums)
Gxxxxn is a must-see. Kxxa screams like a newly born wild horse and croons like an old man talking to the distant boat fading into the spring haze. The noise from Kxxxxa's guitar, so sensitive and disturbing, breaks your old dream-box into pieces and from behind, Rxxxxxe's strict as well as emotional drums blow them up into the high air. This band from the Far East island will attack you like Tsunami and leave you in the shining debris of pure gold.

10 pm
Enablers
Joe Goldring (guitar) Kevin Thomson (guitar) Pete Simonelli (voice) Doug Scharin (drums)
Enablers have established a new direction for the use of spoken word with music. The prose and poetry of Pete Simonelli is intricately woven into the dynamic guitar interplay of Joe Goldring and Kevin Thomson, punctuated by the compulsive and precise attack of Doug Scharin on drums. Musically, the compositions range from melodic minimalism to heavy, rhythmically challenging thickets of sound.

10 pm
Matthew Bourne
Matthew Bourne (piano)
The virtuosic pianist from England. "...characterized by highly personal levels of emotional and physical intensity. Adjectives such as offensive, moving, banal, provocative and breathtaking are among those most commonly used."