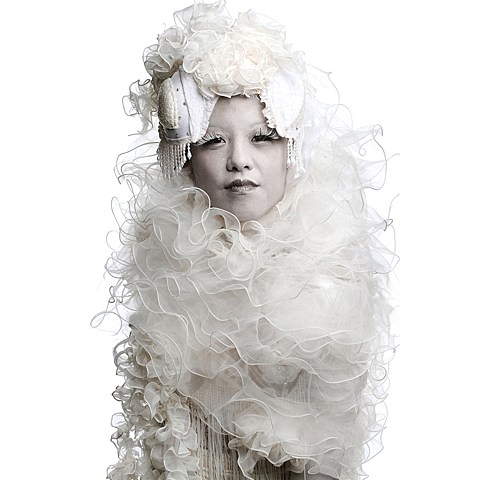 Toby Driver is best known for his work as the frontman and showrunner for the avant-metal shapeshifters Kayo Dot, but he makes use of his diverse talents in many other capacities -- as the bassist for Vaura and Secret Chiefs 3, as the vocalist for the new mope-doom band Disparish, and as a modern classical composer. He wears this last hat for his musical contributions to Ichneumonidae, a music/dance collaboration whose successful 2012 Kickstarter campaign describes itself thusly:

Ichneumonidae (pronounced Ick-noo-MON-eh-dee) is a new collaborative music and Butoh dance piece by Toby Driver and Michelle Morinaga, featuring the virtuosic violin work of Timba Harris. Named after a horrifying family of parasitic wasps, Ichneumonidae explores the astounding psyche of parasites, touching on dualities of survival and self-destruction, the perilous tensions of coexistence, and the subtle horrors of the colonized body.

Originally performed as a violin/guitar duet between Driver and Harris, with dance and percussive elements performed by Morinaga, (see above video) we want to expand the music to suit a larger ensemble, namely, two violins, vibraphone/orchestral percussion, guitar, synth, and heavily processed vocals. This is Toby Driver's first foray into writing music specifically to accompany dance. Our plan is to record the music in a professional studio with the large ensemble and create a dance film in a separate studio using the audio recording.

The Ichneumonidae soundtrack is now available for download via Bandcamp. You can stream its 12-minute opening track below; most of it is highly psychedelic modern classical based around guitar and violin, but it bleeds into electronica at times, too.

You may also recall that Driver's main band Kayo Dot will be playing Invisible Oranges's SXSW showcase on March 13 at Quantum Lounge, along with Black Tusk, Mutoid Man, Yautja, Wild Throne, & Venomous Maximus. They're also playing a few dates on the way back from SXSW; you can check those out (and stream their newest album) below...