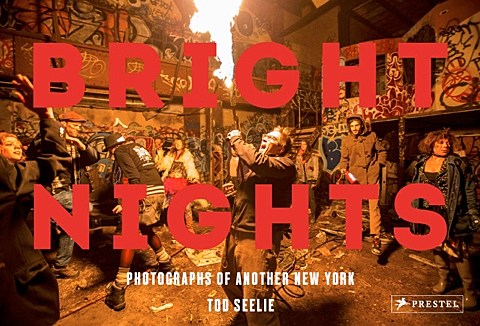 NYC photographer Tod Seelie has been taking pictures of New York City since 1999 (including some for BrooklynVegan), and he's now compiled selections from his 14 years of photographing the city into a new book, Bright Nights. In a piece on the new book, Animal New York writes:

"If you see an island and there's water in the way, get a boat," he says, smiling. "Figure it out."

For two months, Seelie sifted through 14 years of New York photographs, film rolls and negative stacks, mating deliberate diptychs for the book. "That's at my ex-girlfriend at my old apartment in Bed-Stuy in 2003... That's my friend Porkchop in Staten Island on the train tracks in mid-2000s. It was like a playground out there."

Why now? "I'm trying not be an art handler anymore. I have to start having a career," he says. "There're all these hacks doing boring photography. I'm doing something wrong."

The book is being celebrated with a party in Brooklyn at Silent Barn tonight (11/7), which includes sets from local rock bands The So So Glos, Unstoppable Death Machines, Ken South Rock, Amour Obscur, and Japanther, whose Ian Vanek contributed an essay to the book. Advance tickets to tonight's show are off-sale but there may still be tickets at the door..

Tonight's party is about a week and a half ahead of Tod's book tour, which includes dates in Asbury Park and Philly but no other NYC dates at the moment. All dates (many venues still TBA) are listed below...