Steve Austin isn't happy with you 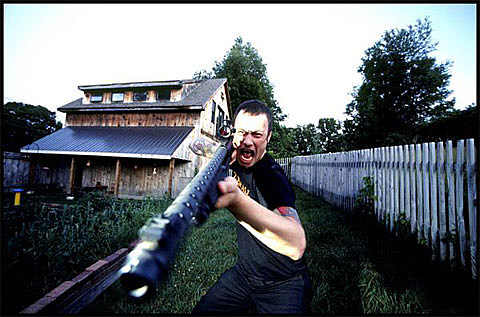 The last time I caught the noisecore giants Today is The Day, it was at the half-full Knitting Factory when the band was supporting Axis of Eden. Backed by the tour-de-force David Hall film of the same name, the band blasted through killer renditions of Axis of Eden faves like "IED" and "Broken Promises and Dead Dreams" to a coordinated psychedelic acid-fried nightmare of a video. They ruled. Now with the band scheduled to appear at the Am-Rep Festival in Minneapolis, Steve Austin is hitting the road again and will play Santos Party House on September 3rd alongside A Storm of Light. Full tour dates are below, which include dates with Unsane and Keelhaul as well.

The genetic make up of Today Is The Day is ever shifting, incorporating members of Mastodon, Complete Failure, Nile, Hate Eternal, Shai Hulud, and many others, and now the band will feature Wetnurse members Ryan Jones and Curran Reynolds. Prepare for war.

Reminder: Unsane and Keelhaul will team up with Pigs and Disappearer at Santos Party House on August 5th. Tickets are on sale.

TITD Dates and a bunch of videos below...

TODAY IS THE DAY - "The Descent"

TODAY IS THE DAY - "Pinnacle"

TODAY IS THE DAY - "This Machine Kills Fascists"

TODAY IS THE DAY - "Mother's Ruin"