Today is the Day at Maryland Deathfest 2012 (more by BBG) 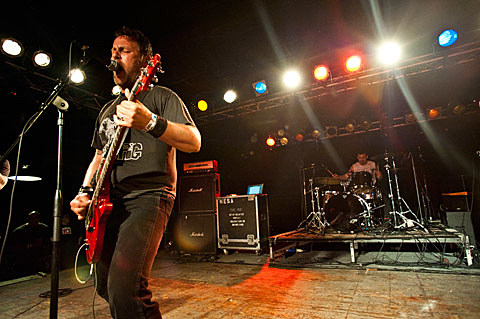 Sad news came out yesterday, as Today is the Day mastermind Steve Austin was involved in a serious van crash on the eve of the band's upcoming tour. Steve and his merch man, Trevor, were on the way to New York to meet up with current TITD drummer Jeffrey Lohrber when their van was struck and sent flying down the interstate. Luckily everyone was ok, although Steve and Trevor sustained some relatively serious cuts and bruises. Much of their merch and gear was destroyed, and almost needless to say, the upcoming tour has been cancelled.

The band had been extremely busy, releasing a new LP, and touring with Eyehategod and Lord Mantis at various points earlier this year. Here's wishing for a speedy recovery for these guys.

You can check out a full statement from Steve Austin below...

At 9:30 PM last night while driving to New York to meet up with our Drummer, our van was struck by an out of control car that had collided with another car. My dear friend and TITD merch man Trevor and I had just left my home in Orland, Maine after a 4 day Thanksgiving break in between tours. We had just completed 50 + Shows since October 7th, both Headlining and Main Support for Eyehategod. Our band was set to play 23 more shows starting tonight in Pittsburgh.

We had been driving for 4 hours and had just crossed into Massachusetts.

Suddenly, Trevor said Look Out! I looked towards the passenger window and saw a car heading in a straight line for the side of our 15 Passenger Van. The car was within 3 feet when he saw it and it nailed us perfectly in the side spinning us around 180 Degrees, followed by flipping the Van UPSIDE DOWN. Trevor and I were thrown super hard inside the Van with Glass bursting all around us, hot transmission fluid pouring down and sparks flying everywhere as the Van was sliding backwards and upside down the Middle of I-495 interstate. I truly felt at that moment that I was going to die.

When we came to a stop, I held on tight and waited thinking the next thing that would happen would be a car finishing us off and slamming right into us. I screamed to Trevor to get out of the van immediately for fear that it would catch on fire and explode. We crawled through the Driver and Passenger windows worried that oncoming traffic would hit us. Once out, we made our way to the guard rail. Disoriented and in Shock I was emotionless.

In one terrible second:

EMT's arrived and Fire Dept. They took me and Trevor by ambulance to the hospital. Cat Scans, X-Rays and Morphine was given. My left arm was cut up by broken glass and the left side of my body was badly beaten and bashed on. We stayed in the hospital for 8 Hours and were finally released early this morning. When we got out the room we had reserved was gone and we spent another hour trying to find shelter and a place to regroup.

It goes without saying that It was Truly a Miracle that he and I were not killed yesterday. Fuck Black Friday and all that it stands for. People had been driving wildly going from store to store to save $10 bucks in the name of xmas. The capper was that the 2 cars that had collided were full of liars that would not admit they were the ones who hit us even though the police can paint match who did.

I am beaten and bruised and recovering. With the help of my friend Aarne Victorine that plays in UXO with me and his friend, we were able to pry open the back door with a winch to be able to get our broken stuff out of the van a few hours ago and rent a U-Haul to be able to get what's left home.

I am devastated and still in shock since this happened. I am extremely sorry to the fans in the towns that we were supposed to play in over the next few weeks. If we weren't injured so badly, I would have still wanted to try to make it to you some how. But for now, I am a father with 2 kids, wife and 2 dogs trying to figure out how to move forward after losing everything yesterday. I just want to let everyone know, that Trevor and I will be ok. It will take some time. Mentally, it was just way to heavy to deal with and we will need some space and time to try to make sense of what just happened.

I leave for home in the morning and will begin to pick up the pieces after I get to feeling better and can physically address the things going on.

Take care of yourselves out there during these holidays. People are careless and drive crazy during this time of year and no matter how careful you are, the other drivers can take your life in a second. I am thankful to be alive right now and can't wait to be with my family. Again, don't worry. If what happened yesterday didn't kill me, I don't know what could. Love and Peace to everyone. If you don't hear from me, for a while it is because I am just trying to get myself back together.