photo: Weedeater at Saint Vitus in 2012 (more by Samantha Marble) 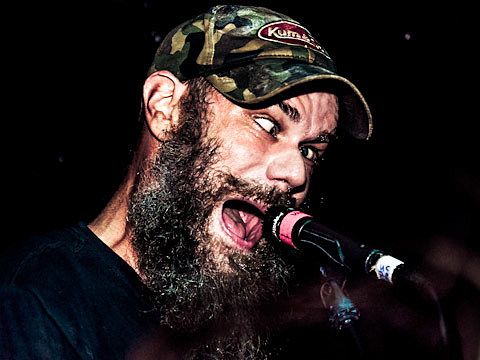 The stacked lineup of Today is the Day, Weedeater, Author and Punisher and Lord Dying have added a leg of east coast dates to their late-spring tour. They'll be heading through NYC for a show at Saint Vitus on May 23 before the unmissable Weedeater play Maryland Deathfest. Tickets aren't yet on sale, but should be soon via ticketfly. Updated dates are listed below.

Today is the Day mastermind Steve Austin is also in UXO with Unsane's Chris Spencer. As a reminder, those guys have a tour coming up that hits Saint Vitus on February 26 with Primitive Weapons and The Austerity Program, and tickets for that are still on sale.

And speaking of Primitive Weapons, the local band who counts Saint Vitus owners among their ranks, they have a new song out via NPR and a new album on the way. The song is called "Night Eyes," and it's a driving, shrieking piece of heavy post-hardcore. You can stream it below. The new album, The Future of Death, is out April 15 via Party Smasher Inc.