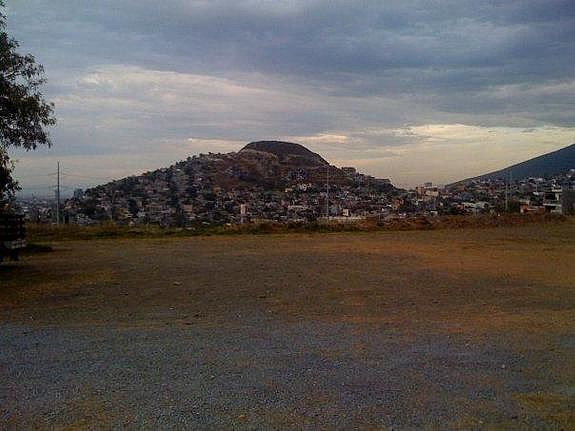 It is my pleasure to announce the inaugural MtyMx All-Ages Festival of Art and Music!

The MtyMx festival will happen on March 20th, 21st, and 22nd at Autocinema Las Torres in Monterrey, Mexico

The MtyMx festival is a collaboration between Yo Garage and Todd P and will feature up to 25 bands a day for three days, playing outdoors on two stages in a beautiful drive-in movie theater on the side of a mountain in the Sierra Madre Oriental. Over one third of the bands playing are from Mexico!

The only bad news (for SXSWers) is that Todd will not be bringing his multi-day fest of day shows to Ms. Bea's again this year, though he doesn't seem to be ruling out doing at least something in Austin before Mexico.

Scared of Mexico? In an e-mail, Todd P told us, "Monterrey has a lower violent crime rate than NYC, Dallas, or Houston, even accounting for international drug trade violence. A major goal of the festival is to dispel US misconceptions that Mexico is the 3rd world, uneducated, dangerous and backwards. Mexico is a modern country with a surging middle class and a vibrant, plugged in 1st world art and music community. Another major goal is to correct the disenfranchisement of Mexican artists and bands caused by strict US visa restrictions on Mexicans. In short: these bands and fans can't go to SxSW."

Details and reservations for Austin-to-Monterrey round-trip bus service, hotel options and onsite camping are forthcoming. More info on MtyMx is below...

Band sets will be staggered (ie. no overlapping sets!), one after the other, so you can see everyone!

The festival includes a substantial visual art element as well, with the perimeter of the space decorated by huge original murals and projected video pieces (on the drive-in screen of course!) by such artists Stephanie Davidson, Sumi Ink Club, Jesse Spears, Katja Mater, JD Beltran + many more to be announced soon!

We will be offering onsite camping as well as discounted rooms in a 3 star hotel in downtown Monterrey. We will soon be taking reservations online for these services.

Discount shuttle buses will run three times daily between Austin, TX and the festival site in Monterrey. We will soon be taking reservations online for these services.

For the past 4 years, Todd P and countless volunteers have organized an independent festival during SxSW at Ms. Bea's in Austin, Texas. With over 100 bands featured and a crowd in excess of 2500 people, Ms. Bea's has consistently provided a free, all-ages alternative to the badges and wristbands of 6th Street. This year, Todd is packing up, joining forces with Monterrey, Mexico-based Independent promoters Yo Garage, and introducing a new post SxSW tour routing direction: South!

Monterrey, Mexico is roughly the same distance as other "next stop on your tour" cities like Dallas, Houston, New Orleans, El Paso, etc.. The idea of the festival is to provide bands with another option during those 3-4 days after SXSW, where they risk playing under attended, money losing shows because a) it's spring break, b) it's a Sunday night in Oklahoma City and c) every other band in the world is also trying to play a show on a Sunday night in Oklahoma City!

The MtyMx Festival will begin at noon on Saturday, March 20th (overlapping with the final day of SxSW), continuing until midnight, on Saturday, Sunday and Monday. Up to 25 bands a day will play staggered (no overlapping sets) on 2 stages, both featuring professional, festival quality sound. The festival will be $30 USD (roughly 390 pesos) for a 3-day pass, all-ages, and will include musical artists from all over the world, with fully one third of the bands booked hailing from within Mexico. Because of restrictive US border controls, Mexican national bands rarely get the chance to play alongside international acts or in front of international audiences.

The venue is spectacular: "Autocinema Las Torres" is a drive-in movie theater on the side of a mountain, overlooking Monterrey's old city towards the foothills of the Sierra Madre Oriental and Monterrey's signature mountain "La Silla." This site is a regular location for concerts, raves, parties and other large-scale events.

Lodging options will include the Fundador Hotel, a three star-rated 76 room hotel available at low cost via the festival, located in Monterrey's historic Barrio Antiguo colonial district. Lower cost on-site camping will also be available, with tents available for rent and a late night "tent city" bar with DJs and fun!

The festival will also be providing a reduced cost, no-frills bus service from Austin to Monterrey and back. The first bus will be an "after bar red-eye" bus leaving at 2:30AM on Friday night/Saturday morning, through the weekend, with more to be added as interest grows. There are also several commercial companies who offer the same route every hour or so for around $48 each way. For those driving, in the last 10 years, the Mexican federal government has embarked on a freeway-building spree including highways directly from the border crossing at Laredo to Monterrey.

Crossing the border into Mexico is very simple. All you need is a valid passport or an official passport card. Passport books & cards currently take 4-6 weeks to order and process if not expedited. Books are $100, cards are $45 (only for entry to Mexico/Canada and can only used when traveling by land). No Visas are necessary.

U.S. citizens can apply for a passport book or card here (PDF)

You can renew an existing passport here

Monterrey is a safe, clean city of 4 million people, and is by far the wealthiest and most modern city in Mexico.

Monterrey has a two line subway system, a modern airport, great hospitals, and modern industry, culture, architecture, and government, as well as the most renowned university in Mexico. Monterrey was ranked as "The Most Secure City in Latin America" by América Economía magazine.

Mercer Quality of Life Survey 2008 mentions Monterrey, to say that Monterrey has lower crime index than New York City. New York is used as a baseline of 100 for the Mercer Personal Safety Index: "Elsewhere in the region, Santo Domingo has the highest ranking at 92 followed by Panama City (96) and Monterrey (99). Bogota (207) in Colombia has the lowest levels of personal safety."

Monterrey has dramatically fewer instances of kidnappings than other Latin American cities, as well as has much lower levels of non-international drug trade related violence.

TOWARDS CORRECTING U.S. IGNORANCE ABOUT MEXICO

The conventional wisdom on the U.S.A. side of the border is that Mexico is a third world country, with hopeless problems of crime, chronic lack of education, and crooked government. Anyone who has traveled extensively within Mexico, or has looked at actual statistics, knows these perceptions of Mexico are deeply incorrect. Mexico is a modern, growing nation with industry, free press, modern art, world class universities, and rich culture and history. MtyMx aims to encourage U.S. citizens to travel to Mexico and see Mexico for themselves.

The U.S. has strict visa restrictions in place to curtail Mexican immigration. To obtain a tourist visa for travel to the United States, a Mexican must provide proof that they have held a job consistently for 5 years, show that they own substantial property, and show they have maintained a stable address for 5 years. Many creative people in the U.S. or Mexico would find these requirements hard to meet. The policy effectively locks out all but the most established Mexican bands and artists from touring or showing their work in the United States - particularly playing or attending SxSW. MtyMx seeks to reverse this disenfranchisement, by bringing the best of SxSW across the border to play with bands and in front of audiences that have been effectively shut out of the party. There is valid, informed modern art and intellectual music being made in Mexico and Mexican artists deserve their place as part of the international conversation.

The MtyMx Festival is also proud to include guest curators Rhinoceropolis curating a portion of the festival. Rhinoceropolis is one of the purest examples of a progressively curated DIY punk space. The space is based in Denver, Colorado and hosts local art shows and promotes them with the same fervor as it does the musical acts that pass through its doors. Whatever you're looking for, you're guaranteed to see -- or hear -- something way outside the mainstream any time you visit. Noise artists, psych folk, avant-garde rock and anything else that is just too weird to fit into the universe of more conventionally minded folk finds a home at Rhinoceropolis. They have been instrumental in booking early "before they were famous" shows as well as present day major tours for acts such as Dan Deacon, HEALTH, High Places, Pictureplane and many others.

YO GARAGE: DIY PARTNERS IN MONTERREY

The promoting duo, Ricardo Ramírez Franco and Leila Ibarra Castro, showcase independent bands in the city of Monterrey. They have their own space called Garage where they put on shows for local acts as well as bands from other states and countries. They collaborate with the bands on recordings, tours and shows in other spaces, also provided in the DIY spirit. This year, besides organizing MtyMx Festival, have been invited to curate a Mexican showcase during SxSW 2010 in Austin.

Brief bios of a few of the Mexican bands playing...

| LOS LLAMARADA |
A 4-piece from Monterrey, MX. "The music is Stooges-crude and rendered
free of distractions, like high-midrange frequencies. It evokes an
eavesdrop upon a found practice space transmission, a shambolic rock
and roll 'happening' maybe meant to have been purely ephemeral and
undocumented. " - Dusted Magazine

| QUIERO CLUB |
Quiero Club sounds like decades of Spanish pop from all over Latin
América through the minds of five creative youngsters. While they can
check fashion designer, producer, and record label owner off their
list of day jobs, they still find a way to take what's good about pop
music and create songs with timeless hooks, thoughtful arrangements
and powerful beats. Their second album Nueva América was recently
released in the U.S. through Nacional Records.

| LOS FANCY FREE |
Los Fancy Free are a psychedelic 4-piece from Mexico City with a
unique kind of reputation. Their energetic live shows equally draw a
bunch of kids to a DIY space and thousands to a ridiculously big
festival. They are highly involved with the Mexican independent scene
as producers through their own label, Silicon Carne, as well as other
record labels. Around Los Fancy Free exists a bunch of weird and
exciting side projects such as Evil Hippie, Pan Blanco and Las
Comadrejas.

| LOS MARGARITOS |
Los Margaritos are one of the fixtures of the Monterrey punk scene.
Filled with images, both visual and lyrical, of melted creatures, sick
heroes and weird teenage habits, Los Margaritos shows have lasted up
to 3 non-stop hours, with kids singing along the entire time. Its the
best secret kept in Monterrey and some think all of México. Their new
album "Melcochambre Sonoro" is free to download but you have to get
your hands on The Amazing Herviononos audio-comic book (illustrated by
Edwin, the singer) that comes along with it. Check out the track "El
mundo ya no sabe rockear" (the world no longer knows how to rock) and
let Los Margaritos teach you.

And a bit about one of the UK bands playing:

| BANJO OR FREAKOUT |
"Alessio Natalizia (aka Banjo or Freakout)... has released several
singles to mass acclaim, including the most recent Upside Down EP,
which is a masterclass in claustrophobic shoe-gaze joy. It's on the
live stage that Banjo or Freakout really take sail though. Allowing
the layered sounds to break free of their laptop based shackles -
Alessio carves out massive curve balls of noise, helped only by an
additional drummer and countless effects pedals and synths. Banjo Or
Freakout really are one of the few essential live acts on the UK
circuit at the moment." - The Line Of Best Fit