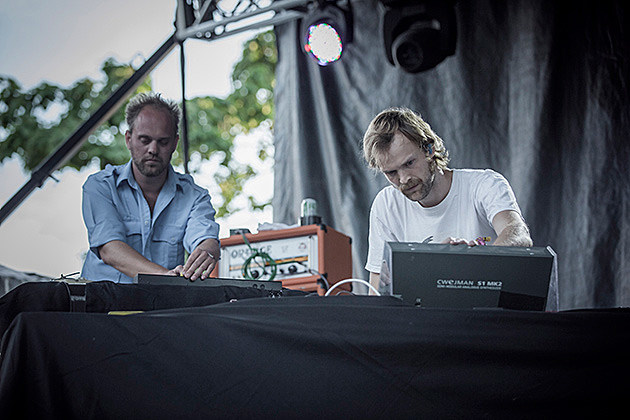 More bongo! More cowbell! Todd Terje and the Olsens satisfy both fixes. Disco influences and burbling electronics aside, the Norwegians are a bonafide jam band given over to that style's sins of redundance and indulgence. A semblance of a recurring dance groove glues the primarily wordless stretches together, but it's no match for the pro-lite accents, aimless keyboard sizzle and cricket-chirping skitter. A flute to kick off a vanilla Latin rhythm? Yep. More vamping? Why not. Tapped triangles and an attempt at outre funk? Do it up. It all seems a convincing Spinal Tap-inspired satire of self-serving jazz fusion, but the seriousness of the musicians--and adoring reaction of the crowd -- suggest otherwise. At least until a cadre of choreographed dancers dressed as angels with lighted necklaces joins for the finale, lending needed levity. Or one hopes that's the intention. So, Pitchfork, does this mean it's too early to book Jan Hammer as a headliner next year? - [Chicago Tribune]

Todd Terje and his live band The Olsens are in North America and just played the final day of the 2015 Pitchfork Music Fest in Chicago where their set inspired some flash-mob dancing. Video of that, and pro video of the band doing "Inspector Norse" at Glastonbury (complete with choreographed dancers), below. You can check out pictures from their Pitchfork set here.

Before jetting back across the Atlantic, Todd and the Olsens are playing Terminal 5 on Tuesday (7/21) with Joakim, and a DJ set from Fixed's JDH & Dave P. Tickets are still available and you still have time to enter to win tickets, too.

In other news, Joakim was one of the contributors to Todd's It's Remix Time EP which came out in June and, as the title implies, features a bunch of remixes of It's Album Time songs. Joakim tackled "Strandbar" and you can stream that and the whole EP below.