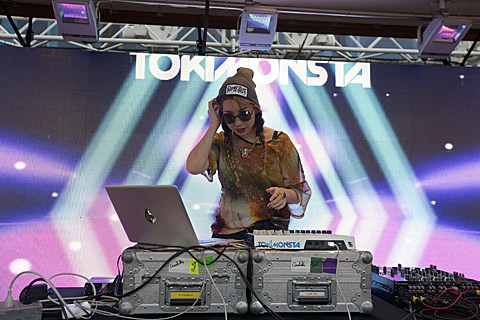 TOKiMONSTA began picking up more speed as an artist on Flying Lotus' Brainfeeder label, and she's now signed with big-time EDM label Ultra (Deadmau5, Kaskade, Bloody Beetroots), who will release her new album, Half Shadows, on April 2. From the sound of the album's two singles, "Go With It" (featuring MNDR) and "The Force" (featuring Kool Keith), she's not changing her sound to fit in with her labelmates (luckily). Instead, she shows us what the LA beat scene sounds like mixed with dream pop on the MNDR collab, and on the one with Kool Keith, she creates an updated vision of the futurism that Keith was doing with Dan the Automator in his Dr. Octagon days. You can stream both songs below.

TOKiMONSTA is playing a few live dates too, including a record release show for Half Shadows with "very special guests" in NYC on April 9 at Music Hall of Williamsburg. Tickets for that show go on sale today (3/21) at noon. All dates are listed below.

TOKiMONSTA also just offered a remix of Justin Timberlake's "Suit & Tie" off his new album, The 20/20 Experience, which is out now. This remix follows the one Four Tet did earlier this month, though unlike Four Tet's, TOKiMONSTA's was not officially approved by JT's label. You can stream both of those remixes below.

Justin also recently released the video for "Mirrors," which you can watch below too. And in more related news, The Hollywood Reporter reports that he confirmed that a sequel to The 20/20 Experience (the "second half" of the album) is on its way. His tour with Jay-Z hits NYC on July 19 and 20 at Yankee Stadium and tickets for both nights are still available.

All TOKiMONSTA tour dates are listed, along with all streams and videos, below...