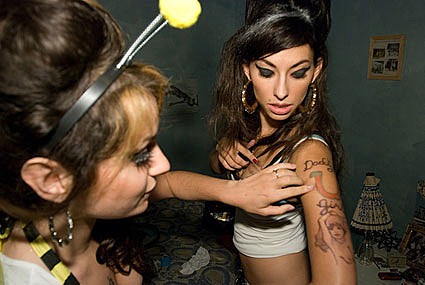 Amy Winehouse's father Mitch has claimed that his daughter cannot get into the USA because she was duped into signing a drugs possession confession.

The singer's father told 'This Morning' that Amy was asked to sign a form after her recent arrest in Norway but she did not know what she was signing. Winehouse and her husband Blake Fielder-Civil were arrested for possession of marijuana but the singer's father claims that this was a mistake. "It didn't belong to her, it belonged to someone else on the tour. They arrested Blake, Amy and the person who was responsible."

"They only released them after they signed a form, which they were told was a release form," he said.

"It was in Norwegian. It was actually a confession, so this is being dealt with now by the Norwegian authorities and the British consulate because the ramifications of that are that she now cant get into the States and she was meant to go next week."

I guess "What else is new?" would be good to say here. Maybe they'll clear it up in time for her performance at the Woodies @ Roseland on November 8th. In related news, Tokyo Police Club has been added to that bill that also includes Spank Rock. They don't sell tickets, but I'll be giving a bunch away (stay tuned).