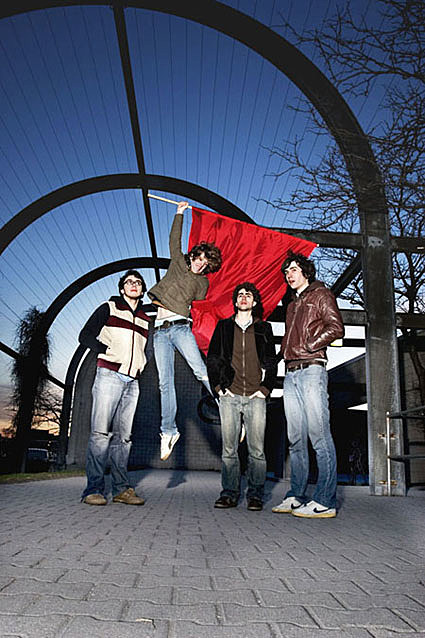 Though technically signed to Paperbag Records in Canada, Tokyo Police Club are practically an unsigned band who are young, and doing awesome things like playing Letterman and headlining Bowery Ballroom (tickets on sale) (Maxwell's too), so enquiring minds what to know just WHO they will finally sign with. Will it be a major? Will it not be a major? Word on the street says it will be....Saddle Creek - home of Bright Eyes, The Faint, Cursive, and Maria Taylor (not a major). Maybe, maybe not.

Merge Records is proud to announce that we will be releasing Our Ill Wills, the new album from Swedish pop wunderkinds Shout Out Louds, in September of 2007. The new album, which is a follow up to their extraordinary debut, Howl Howl Gaff Gaff, will be in stores on September 11th 2007. Our Ill Wills contains 12 tracks recorded in Sweden during the late fall of 2006. The album was produced by Bjorn Yttling of Peter Bjorn & John.

Aussie sextet Architecture in Helsinki has signed to the Polyvinyl Record Co. for North America. AIH will release its new single "Heart It Races" on the label on CD, 12" and digital formats on June 5 and its eagerly awaited third full-length album Places Like This on Aug. 7. To make things more interesting, there will be several different remixes and cover versions of "Heart it Races" released as B-sides. The band will be touring the US in June.

Stay tuned soon for an upcoming Tokyo Police Club interview by BrooklynVegan Mike where we don't ask them about Saddle Creek, but do ask them other stuff.