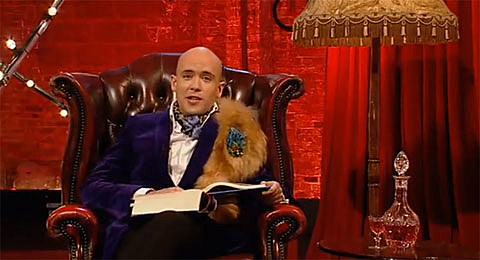 It's a late show - begins at 10pm. If you want to make a night of it, another comedy show, with Kristen Schaal and more, is happening at the same venue earlier.

The next 'Pretty Good Friends' with Eugene Mirman happens at Union Hall on Sunday, 3/13 at 7pm. That's an early show that is followed, strangely, by a "CONAN O'BRIEN STAND-UP GUEST SHOWCASE" with Eliot Glazer, Andy Haynes, Matt McCarthy, Eugene Mirman, John Roberts, Dan St. Germain, Myq Kaplan, Joe Mande, Dave Hill, Jay Oakerson, and Kurt Metzger. It is unclear if Conan even knows about this intimate Park Slope basement show with his name on it, but it should be good nonetheless.

Reggie Watts may or may not being playing a free show at Cake Shop tonight (3/8), but he's definitely playing TWO shows at Music Hall of Williamsburg on March 30th.

Aziz Ansari may or may not be on the bill of "Tell Your Friends" at Lolita bar tonight, but host Liam McEneaney has leaked the following clue:

JUST ADDED TONIGHT:
A guy whose name is very nearly an anagram for "ZZ Sariani."
You might know him from his show that is anagrammed as "A Crankiest Pardoner."
And his sketch show on "VTM" might also be known as "Giant Human."
And his first name is "Aziz."
And I "farted."

Brody Stevens, who like many of these guys is also heading to SXSW, will be there too!

Eugene Mirman can also be found at City Winery with John Wesley Harding (and Andrew Bird) on April 22nd.

A Tom Allen video below...