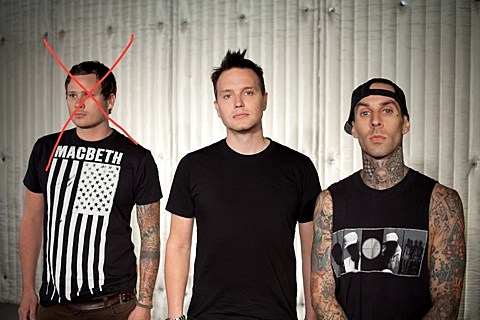 FIRST A BLIZZARD, and NOW THIS?!?!

Today, the Travis Barker-presented Musink Festival was announced for March 20-22 in Costa Mesa, CA with Bad Religion, Rancid, Yelawolf, OFF!, Sick of It All, Ignite and Travis's own band billed as blink-182 w/ Matt Skiba (who you may know as the frontman of Alkaline Trio).

It's billed that way because, as Radio.com reports, Tom Delonge has quit blink-182:

"We were all set to play this festival and record a new album and Tom kept putting it off without reason. A week before we were scheduled to go in to the studio we got an email from his manager explaining that he didn't want to participate in any Blink-182 projects indefinitely, but would rather work on his other non-musical endeavors." Travis Barker and Mark Hoppus plan to honor all Blink-182 commitments including the Musink Festival and are excited to have singer/guitarist Matt Skiba join them for this project. "No hard feelings, but the show must go on for our fans." Additionally, Skiba will continue to make new music and tour with the Alkaline Trio.

Tom also quit via an email from his manager in 2005, but the band didn't continue without him that time. The Mark... Matt, and Travis show?

UPDATE: Tom is now saying that he didn't quit the band. He posted the following:

To all the fans, I never quit the band. I actually was on a phone call about a blink 182 event for New York City at the time all these weird press releases started coming in... Apparently those releases were 'sanctioned' from the band. Are we dysfunctional- yes. But, Christ..... #Awkward #BabyBackRibs

"The ONLY truth here is that I have commitments that limit my availability this year. I love Blink-182 and I'm not leaving," he added, to Entertainment Weekly.

UPDATE 2: Mark and Travis open up about in a new very revealing interview with Rolling Stone. Travis says "I think he's just bummed because Mark and I were finally honest," and "It's hard to cover for someone who's disrespectful and ungrateful." Read more here.