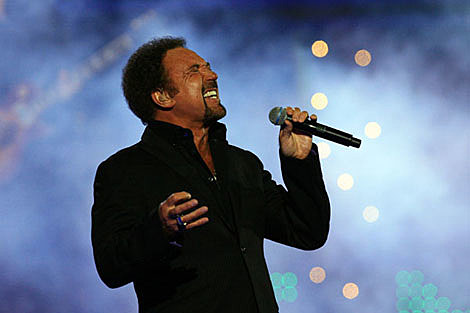 Legendary singer Tom Jones releases his first new US studio album in 15 years. Entitled 24 Hours, most of the 13 songs are co-written by Jones and produced by British duo Future Cut, who recently helmed tracks for Lily Allen, Kate Nash, Estelle and others. Jones co-wrote over half of the songs on 24 Hours, a first for him. "It's all very well just singing songs, but for this record I really wanted to get properly personal. In other words, you listen to this album and you get the real me."

In addition to Jones' co-written songs, Bono and the Edge of U2 contribute and play guitar on a brand new song "Sugar Daddy," written specifically for Jones and inspired by a meeting of the friends in a pub in Dublin.

It all started with Bono, explains the singer, who plans to perform as many as six of the new songs in his MGM Grand shows through Jan. 28. The two met in a Dublin nightclub more than two years ago, and Jones said, "I'd love you to write me a song."

"(Bono) said, 'OK, but if I'm going to write one, it's going to be about you.' " The two went on to discuss Jones' past, with Bono confessing, "When he was a kid, he saw me on TV and he liked the way I dressed as well as the way I sounded. So all that stuff is in the song."

When the two met up again in another club -- this time in London -- Bono sang the rough product of his labors with U2-mate The Edge and writing partner Simon Carmody. The tongue-in-cheek ditty called "Sugar Daddy" captures the Tom Jones swagger by proclaiming "I'm the last great tradition" and boasts, "You don't send a boy to do a man's job." But it also confesses, "the older I get, the better I was." Jones says he and his manager son, Mark Woodward, have talked about pop singers aging and people saying, "Maybe he shouldn't be doing this anymore."

"But you get a blues singer, and nobody's concerned about his age. ... With blues singers, people seem to enjoy that these men have experienced life. And I think maybe this is what happened with this (album) as well. "Maybe it's because I've been around a long time, I think these songs are more fitting now."

After Bono went through the lyrics, he pointed out "That information you gave me in Dublin, there's a lot of that in this song."

The singer remembered Bono's approach -- and took corrective action for royalties -- when the original recording sessions stalled out.

Tom Jones, currently in the midst of a residency at the MGM Grand in Las Vegas, is coming back to NYC in February for a show at... Terminal 5. $50 tickets go on sale Friday. All dates below...