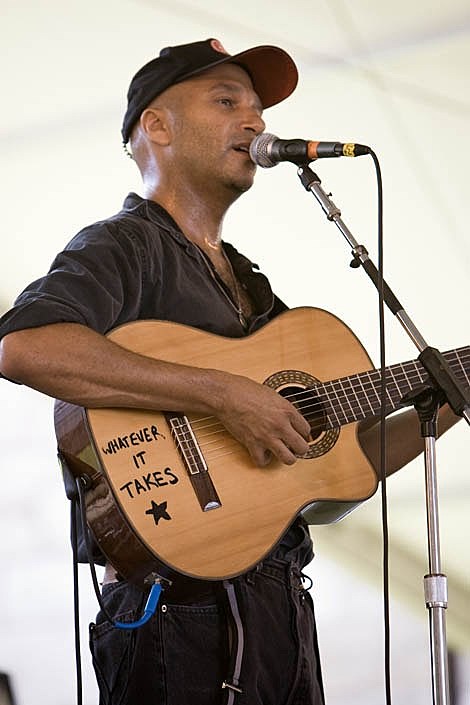 Rage Against the Machine guitarist Tom Morello has announced plans to perform at the Occupy Wall Street protest at noon [today] in Manhattan. Morello, who has previously performed at the Occupy Los Angeles rally, will play a solo set as the Nightwatchman.

"The Nightwatchman will Occupy Wall Street [today] at noon, adding one more voice to the growing chorus of millions demanding economic justice at home and around the globe," Morello tells Rolling Stone. "And I'll be playing some songs. Likely in the rain."

Morello will be the third major act to perform at the protest. Neutral Milk Hotel's Jeff Mangum and rapper Talib Kweli have recently played impromptu sets at the protest site. Earlier this week, Kanye West visited the scene, but did not perform. [Rolling Stone]

Today (10/13) is also the first day of NY Comic Con & Anime Fest over at the Javits Center. Tom Morello performs in the convention center tonight with Z-Trip as part of the con's kickoff concert.

We get why the Rage Against the Machine guitarist would show up at Occupy Wall St, but why Comic Con? Well, Comixcorner.com says:

Tom Morello's graphic novel Orchid, which tells the tale of a 16-year-old street prostitute in a dystopian future, will be released in twelve issues through Dark Horse Comics will be on sale October 12th. Orchid features a variant cover by the well-known and influential street artist Shepard Fairey, with interior art by Scott Hepburn (Star Wars: Knights of the Old Republic).

"Orchid is part Suicide Girl, part Joan of Arc, who becomes the Spartacus of Whores in a story that merges the epic scope of Lord of the Rings with the politics of street terrorism." - Tom Morello

"I'm stoked and honored to be playing alongside Tom Morello at the New York Comic Con. He's one of my favorite guitarists of all time, and I've always admired the level of consciousness he brings to the table. This show is gonna be great. Can't wait to read his new comic too." - DJ Z-Trip

Tom Morello is appearing courtesy of Dark Horse Comics, New York Comic Con and Midtown Comics - who will be selling Orchid #1 exclusively at the Kick-Off Concert.