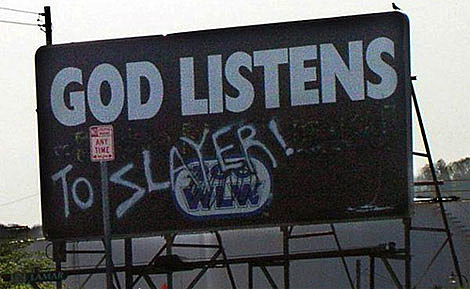 If the prospect of a single company mounting a Guns n' Madonna tour worries you, it also concerns some in the business. Via e-mail, Tom Morello, the guitarist in Rage Against the Machine, told me that a Ticketmaster-Live Nation merger could have huge consequences.

"Fewer and fewer gatekeepers mean fewer choices and higher prices for fans," he wrote. "One huge monolith means no choice at all. Fans and artists must develop some organized counterweight quickly or resign themselves to their fate." [David Carr, NY Times]

NY Senator Chuck Schumer not only agrees with Tom, he has now joined the fight against Ticketmaster started by angry Bruce Springsteen fans...

"Fans who thought they were going to 'The Promised Land' of Springsteen found themselves in the 'Badlands' of ticket scalpers," Schumer said. The senator added that he wants to put the brakes on Ticketmaster's proposed merger with Live Nation, the nation's largest concert promoter. [Newsday]

NJ's Star Ledger newspaper hasn't forgotten yet either. Today's paper has an article entitled "More music fans claim scalpings by Ticketmaster". In it they talk to people who have come forward with similar claims of Ticketmaster-to-TicketsNow trickery.