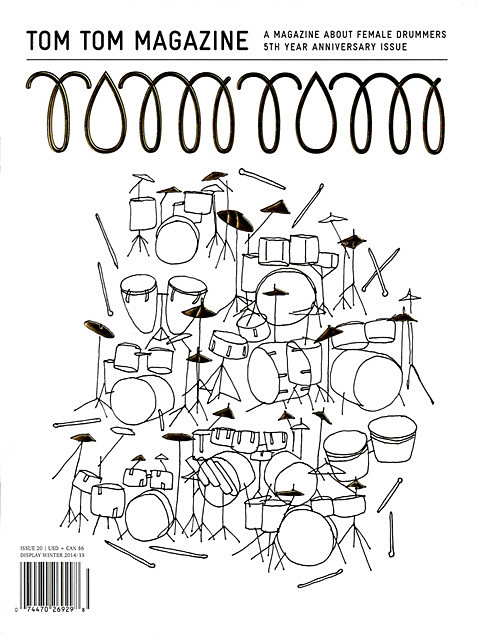 When I was 29, I was Google searching "female drummer," "girl drummer," and " woman drummer" out of curiosity. The results were really terrible at best. There were pages of "Can women really play the drums?" and "Top sexiest drummers of our time" lists then immediately after it would just go to lists of guy drummers. Having been a riot grrrl since I was a teenager and having played music since I was 15, having worked in music all my life, and having thrown many shows at my loft house in Brooklyn (The Woodser), I was kind of shocked to see that the internet hadn't caught up with the world of female drummers I knew. I wanted the world to know we existed. So I started Tom Tom as a blog with the intention to solely change the Google search results of those keyword searches. I thought there would be someone else that was already running a magazine about women drummers and was so convinced that they were going to eventually email me to let me know that they were already doing it. Then within six months time, it became obvious that there wasn't anyone else doing it. - Tom Tom founder Mindy Seegal Abovitz [via Bitch Media]

The only magazine specifically about female drummers, Tom Tom Magazine is celebrating its fifth anniversary with the current issue, seen above, that includes interviews with Warpaint's Stella Mozgawa, Emily Rose Epstein (Ty Segall Band) and more.

In line with Tom Tom Magazine's vision of uniting and elevating the female musician community, the academy is run by highly experienced female drum instructors. The Tom Tom Academy welcomes students of all genders, ages, and backgrounds.

In addition to lessons, Tom Tom Academy has a free "Last Thursdays" event at their Bushwick HQ, the next one being February 26:

To attend Tom Tom's "Last Thursdays" you need to sign up for details.

Then on February 28, Tom Tom has a workshop called The Shed:

Split into two tiers based on skill level, this two-hour workshop will outfit you with the skills, fills, tools, tips, and exercises you need to take your drumming to the next level.

The $20 registration for this workshop includes two hours of intense instruction plus all the coffee you'll need, plus a fresh pair of complimentary drumsticks.

You need to reserve a spot to attend.