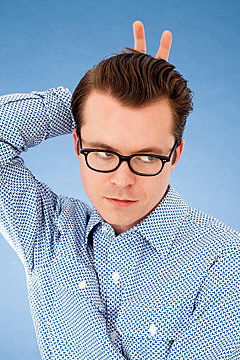 Tom Vek released his third album, Luck, last month via Moshi Moshi. His style -- jittery, syncopated, danceable postpunk -- is as distinctive as his voice, and he doesn't futz with the formula too much here. That's not a bad thing. You can stream the album via Rdio and check out a few tracks, remixes and videos from Luck below.

Both of those shows happen the same week as this year's CMJ Fest (Oct. 21 - 25). The Baby's show is before CMJ starts and its unclear whether the Merc show is an official showcase. But expect more Tom Vek shows that week to be announced as we get closer to the fest.

Videos, streams and remixes below...