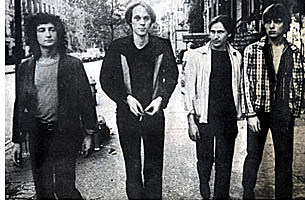 TOM VERLAINE
"Tom Verlaine is a singer, songwriter and guitarist, probably best-known as a founder of Television." [Wikipedia]

He "will release two albums simultaneously in Spring 2006. 'Around', a 16-song instrumental set and 'Songs And Other Things', his first vocal album since The Wonder (1990) will be released on Thrill Jockey in late April." [The Wonder - a Tom Verlaine site]

TELEVISION
"The original line up of art-punk pioneers Television play the Phoenix on June 9 as part of North By Northeast (NXNE). It's the first time the group has performed in Canada since 1992, when they re-formed in support of their self-titled third album. Tix, $39.50, go on sale tomorrow at Ticketmaster....

The group, featuring singer/guitarist Tom Verlaine, guitarist Richard Lloyd, drummer Billy Ficca, and ex-Blondie bassist Fred Smith, is best known for the revolutionary 1977 debut release Marquee Moon. Verlaine will also be the subject of the NXNE celebrity interview at 2-3:30 p.m. on June 9 at the Holiday Inn with only NXNE delegates able to attend." [Toronto Sun]