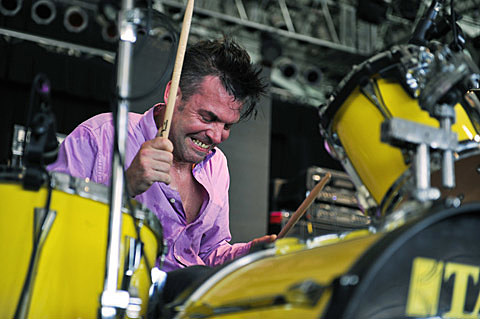 Tomahawk is back! The supercrew featuring Mike Patton (Faith No More, Fantomas, etc), Duan Denison (The Jesus Lizard), Trevor Dunn (Melvins Lite, Fantomas) and John Stanier (Battles, Helmet) has returned with a new LP Oddfellows, due this January via Ipecac. Check out an album teaser below.

So far Tomahawk has only one US date scheduled, at Voodoo this year. The show will be their first in nine years. Pray for a round two on the East side.

In the meantime, Mike Patton is still cranking out releases like his name was Robert Pollard. Luciano Berio Laborintus II is Patton's latest opus, due on 7/3 via Ipecac, and features the eclectic musician's reinterpretation of Luciano Berio's "Laborintus II". Get your copy at Ipecac.

Faith No More also have some shows scheduled this summer, as do Faith No More member Roddy Bottum's band Imperial Teen.

In related news: Melvins tickets for motherf*ckin' 6/30 Lit Lounge show go on sale today at the venue at 7PM. In still more related news, Gay Witch Abortion, who is also on the show, will play Union Pool the next night (July 1st) as part of a bill with Fashion Week and Gentlemen. $8 gets you in. Melvins also have lots more dates coming up too.

Tomahawk teaser is below.