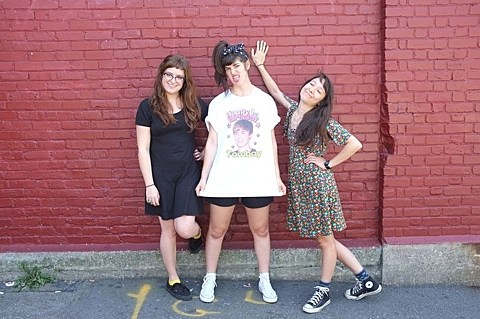 One of our recommended July 4 options in NYC is the semi-secret Destruction Unit show at Silent Barn happening during Ascetic House's long Independence Day Weekend. D Unit are still not billed on the event page ("Lucifers Stoned Disciples" are though) but other artists are including Massachusetts band Tomboy (the other band of Ali from Potty Mouth), Emily Reo, Emily Reo collaborator Cuddle Formation (aka Noah Klein), Arm Candy, Alice (a new band) and Mute Benny. If "Mute Benny" doesn't sound like the name of a band you're familiar with, we don't think it will be too hard to guess who it is. That show starts at 1 PM and is $10 at the door.

The Ascetic House weekend also includes Destruction Unit at The Studio at Webster Hall on Thursday (tickets), Marshtepper and others at Palisades on the Fourth (tickets), Jock Club and others at Bossa Nova Civic Club on 7/6 (free), and "Lucifers Stoned Disciples" at Baby's All Right on 7/7, among others.

Speaking of free shows on piers, the River Rocks series kicks off July 10 with Wild Beasts and Mutual Benefit.