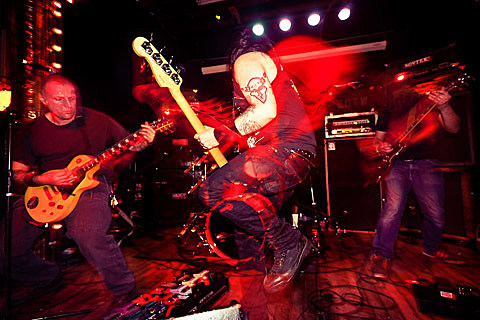 Post-metallers Tombs recently released Savage Gold on Relapse and the Brooklyn-based band is heading home to celebrate. Tombs will be joined by the death metal mind-expanders Pyrrhon, the industrial/EBM of StatiqBloom, and the sludgy/noise rockers Passage Between at Saint Vitus on July 25 for a record release show. Tickets are available now.

All the involved bands have been busy. In addition to Savage Gold, Tombs are currently wrapping up their West Coast tour with Pelican. Pyrrhon just played a Northside gig and will be hitting Obnoxious Noise Fest in August with Malignancy, Mutilation Rites, Artificial Brain, and more. StatiqBloom -- who recently supported Vulgar Fashion -- play a Rituals presented showcase with VoidVision and Phemale Friday (6/20) at Coco 66 in Greenpoint. Tickets are $10 at the door. And Maryland's Passage Between are currently working on their debut full-length.

Stream Savage Gold, along with tracks from the other bands below...