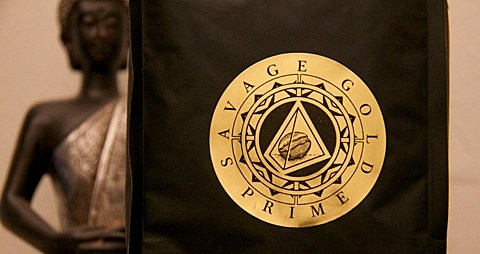 Modern metal renaissance man Mike Hill of Tombs is getting into the beverage game. First, he has a beer on tap brewed by Tired Hands Brewing Company in Ardmore, Pennsylvania. He's calling it the Savage Gold beer, most likely in reference to Tombs' recently released Savage Gold on Relapse, and not a tribute to a death scene in Goldfinger. Says the press release:

Has notes of a Jamba Juice in Colorado. Got it. Tired Hands will also be hosting a beer launch today (7/18) where you can win copies of Savage Gold.

Now, for the dark stuff. Hill has started a premium coffee company named, you guessed it, Savage Gold Coffee.

The first roast, Savage Gold Prime, is an Ethiopian Yirgacheffe coffee bean grown between 6,000 and 6,500 feet above sea level. It is an aromatic and dynamic coffee roasted to perfection with a large flavor profile. It is sourced from a co op of Ethiopian farmers and is 100% Fair Trade, certified organic and wet (mechanically) processed.

I had the chance to interview Hill in the days before Savage Gold was released. As his Invisible Oranges contributions attest, the guy is whip smart and a straight-shooter. Plus, he has great taste in show lineups. On July 25, Tombs will play a record release show at NYC's Saint Vitus with a little band named Pyrrhon, along with StatiqBloom and Passage Between. Tickets are still available, and so will be a keg of Savage Gold at the show. Then in October, Tombs will hit the road with Pallbearer and Vattnet Viskar, swinging back around to Saint Vitus on October 27. Tickets for that show are also still available. The rest of the current tour dates are listed below.