Tombs at Death By Audio (more by Justin Tyler) 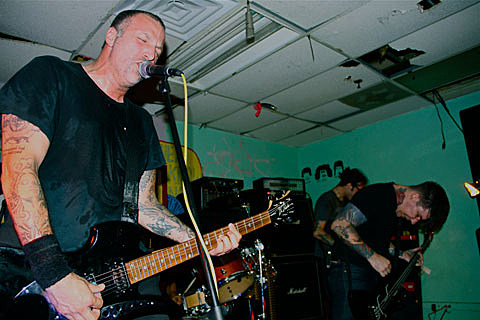 While we await the wrath of the new Tombs LP (which I have been told is in the works), Relapse has gathered up some of the seedlings that spawned the vitriol into Fear Is The Weapon, a compilation of rare tracks and demos that preceeded 2009's incredible Winter Hours. Some of you may recognize tracks from the bands first EP on Black Box Recordings (Mike Hill's label), and from their split with the venerable Planks (who ripped it with Tombs at Death By Audio), alongside demos of Winter Hours tracks like "Gossamer" available for download above and stream below. Fear is The Weapon is limited to 1,000 copies and due on Tuesday (11/9).

Tombs won't be blessing NYC with their damnation presence, but will head down the East Coast in late December. Full tour dates, the song stream, and some video, is below.