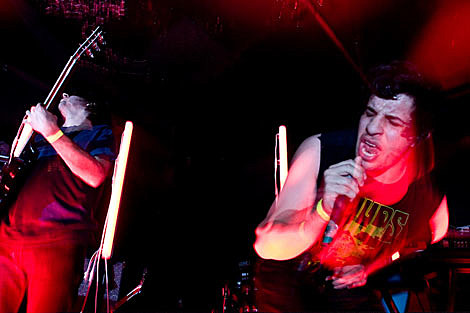 Pelican and Tombs have been added to select dates of the previously mentioned Isis tour including the currently on sale show at Irving Plaza on June 2nd. Updated tour dates are below.

Tombs also has two other dates on their calendar: April 19th with the mighty Bison BC in Danbury CT and April 12th (Easter) with Wetnurse, Black Anvil and Genghis Tron for Show No Mercy at Public Assembly. Want to go to the Brooklyn one? I have 2 pairs of tickets up for grabs. Details on how to win below.

After defiling Easter Sunday, Genghis Tron will head to Coachella. From their they head home to dedicate the rest of the year to writing and recording the follow-up to Board Up The House. Public Assembly may be their last show for a long time, so if you didn't catch them (and possibly almost get killed) when they played Europa with Converge and Coliseum, don't miss this.

Isis have a new album on the way, Wavering Radiant. Look for it on May 15th.

Mike Hill (of Tombs) and Isis have a history together; Hill produced songs on Isis's The Red Sea EP. Before the release of Tombs' mammoth Winter Hours, we interviewed Mike Hill. Tombs recently played SXSW, check out a video of that below.

Black Anvil, who recently dropped Time Insults The Mind on LP, have a few other dates lined up including April 10th in Bethpage, NY.

Bison BC will also be in the hood soon... taking on Children at Death By Audio on April 18th.

More videos and all tour dates below....

TO WIN SHOW NO MERCY TICKETS: Email us at BVCONTESTS@HOTMAIL.COM with a subject line of "Genghis Tron". Include your first and last name. Winners will be selected at random and notified the afternoon of April 10th.