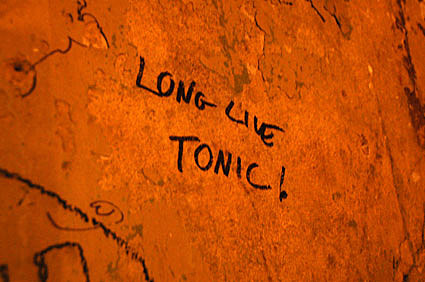 Since the closing of LES spot Tonic in 2007, The Stone has been one of the venues that's attempted to fill the void left by the experimental-music-friendly space.

Like Tonic did, The Stone frequently brings on guest curators (not coincidentally Stone founder John Zorn was one of Tonic's most regular hosts and played at Tonic's final show). Now, with guitarist Grey Gersten's monthlong May curatorial run ending Sunday, May 31st, former Tonic co-owner Melissa Caruso Scott comes out of booking retirement to take the reigns in programing the first two weeks of June at The Stone.

Speaking about her choices Scott said, "These artists played some of my favorite Tonic shows and I can't wait to see them again." Her picks include Japanese musician Yuka Honda, who's also playing a Summerstage show with Mike Watt, guitarist Charlie Hunter, Elysian Fields, Vernon Reid, Joan as Polcewoman, cellist Erik Friedlander, and more. Her full schedule is posted below.

Speaking of Friendlander, he plays on Yoko Ono's new DON'T STOP ME! EP (out June 9th Via iTunes Exclusive Digital Download), and you can also catch him live on June 5th along with saxophone player Colin Stetson at the Abrons Art Space Recital Hall. The show is presented by The Manhattan New Music Project, and tickets are on sale.

Before the time of both Tonic and The Stone, the original Knitting Factory on Houston Street featured an ecclectic mix of avant and experimental music (frequently with Zorn and others). The co-founder of that venue, show promoter and current owner of City Winery Michael Dorf, will curate the second half of the June at The Stone.

Acts on his schedule include Shilpa Ray & Her Happy Hookers (who have completed their Pianos residency and are also playing Citysol), Ethan Iverson (of the Bad Plus) with saxist Tim Berne, and Marc Ribot, the guitarist who's had considerable presence at each of the aforementioned venues -- gigging regularly at the Knit on Houston St, getting arrested for protesting the closure of Tonic, and hosting several nights of his 55th-birthday retrospective at The Stone in mid-May.

Check out the full June schedule for The Stone, below...

6/3 Wednesday
8 pm
Sexmob
Steven Bernstein (trumpet)
Sexmob has been a band for 13 years....they have just released their 7th cd .."Sexmob meets Medeski- live in Willisau"...the follow up to the grammy nominated "Sexotica".

6/5 Friday
8 pm
Elysian Fields
Jennifer Charles (voice) Oren Bloedow (bass, guitar)
Legendary cult heroes Elysian Fields have always travelled in mysterious waters. Led by the enigmatic New York co-composers Jennifer Charles (vocals) and Oren Bloedow (guitar), the music born of their collaboration is not easy to categorize. They carry a torch for nature, sex, love, the cycle of death and rebirth, and the sounds of folk and jazz ballads, no wave and classical music, seamlessly interwoven into a style that is at once languorously romantic and tough. www.elysianfieldsmusic.com

10 pm
Suphala with Special Guests
Suphala (tabla)
Tabla Artist, Composer, and Producer, Suphala, has collaborated with a wide range of artists including Timbaland, Norah Jones, and Yoko Ono. A student of Ustad Allarakha and Ustad Zakir Hussain, Suphala has combined her knowledge of Indian classical music with a wide range of western styles which is reflected in her compositions. more info at: www.suphala.com

6/11 Thursday
8 pm
Marco Benevento Solo
Marco Benevento (piano)
Marco Benevento first came to national attention as one half of the Benevento/Russo Duo, the acclaimed instrumental post rock experimentalists, who've earned a legion of fans performing at Lollapalooza, Austin City Limits and Fuji Rock Festival. Holding court behind a Hammond B-3, Wurlitzer, vintage keyboards, toy pianos, pedals, samplers and circuit bent toys, the Brooklyn-based artist quickly established himself as a visionary young keyboardist. A Berklee graduate who has studied under Joanne Brackeen, Kenny Werner and Brad Mehldau, Benevento recently turned his attention back to his first love, the acoustic piano. On his latest album, "Me Not Me," he features interpretations of songs by Leonard Cohen, Beck and My Morning Jacket among others. His appearance at The Stone will be a rare solo piano performance. Fifteen dollars.

6/17 Wednesday
8 pm
Elliott Sharp
Elliott Sharp (guitar)
Octal is a series of etudes with improvisation for the Koll 8-string electroacoustic guitarbass. In this set, E# previews Book 2, which will be recorded for Cleanfeed Records.