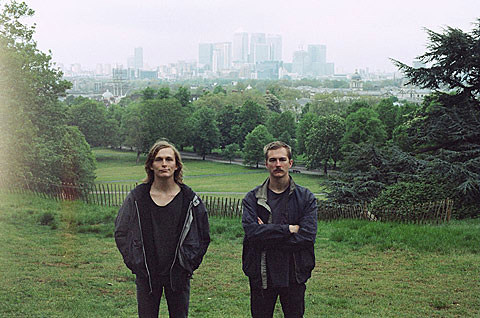 Brooklyn-via-Florida-by-way-of-Montreal duo Tonstartssbandht haven't put out a lot of recorded material -- 2011's Now I am Become was their last full-length -- but they are playing live constantly. So it kind of makes sense that their new double album, Overseas, was recorded live at shows. Most of the recordings were made in cities across Europe during an extensive Spring 2013 tour, hence the name of the album. It'll be out June 24 via Company Etc/Arbutus and we've got the premiere of "First Taape," which was originally written/recorded by Montreal's Sugar Boys -- a band that also includes Tonstartssbandht's Andy Boay. Listen to that below.

Tonstartssbandht, who just wrapped up a European tour with Mac DeMarco, will play a record release show in NYC at Silent Barn on June 27 with Blues Control and PC Worship. They'll also play Radio Bushwick on July 19 with more TBA.

All dates are listed, along with Overseas' artwork and tracklist and the song stream, below...