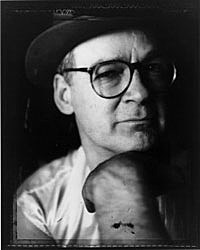 According to Jim O'Rourke's Drag City site, he's playing with the Boredoms on May 25th at Knitting Factory and with Tony Conrad on May 24th at The Kitchen. The truth is that he and the Boredoms are playing Bowery Ballroom on May 25th (sold out), and that I have no idea if he's actually playing at the May 24th thing. More details on that after some quotes...

"Tony Conrad, best known for playing violin with the Theatre of Eternal Music in the early sixties, and for his more recent violin-centred compositions, admits that his introduction to his instrument was mostly negative." - from an Interview with Tony Conrad

"Violin player Tony Conrad was one of the pioneers of New York minimalism, of microtonal music and of "deep listening". He worked in 1962 on Lamonte Young's "Dream Music" project with the likes of John Cale and Angus MacLise (both future Velvet Underground)." - from a biography of Tony Conrad

"I don't know a better way to describe Chicago (the city not the band) guitarist Jim O'Rourke than to say that he's a gadfly. Here's a young guy who's had his hand in everything, working with or producing or remixing the likes of Sonic Youth, John Fahey, Faust, Tortoise, Tony Conrad, Barbara Manning, Red Crayola, Guided By Voices and... well, it'd be easier to tell you who he HASN'T worked with" - from an interview with Jim O'Rourke

"Well, I have them, and yes, they are amazing, and they have cemented my opinion that Tony Conrad is a genius. Just listen to 4 violins 1964 to get an idea what these repressed recordings sound like." - Jim on Tony

"Founded in 1971 by video artists Woody and Steina Vasulka, The Kitchen is internationally known as a leading center for video, music, dance, performance, new media and literature. The first institution to focus exclusively on cutting-edge, multidisciplinary works, it has been a powerful force in shaping the cultural landscape of this country. Over the last thirty years The Kitchen has documented every one of its performances with video and/or audiotape." - from the Amazon album description for "From The Kitchen Archives - New Music New York 1979" featuring Tony Conrad, Philip Glass, and others

On May 18th and 24th (2005), the Kitchen is hosting special Tony Conrad events (performance/video). Jim O'Rourke is listed as the curator. Keep reading for exact details...

One of the pioneers of structural filmmaking, video art, and minimalist music, Tony Conrad restages his 1972 performance-installation at The Kitchen, Ten Years Alive on the Infinite Plain. This “minimalist spectacle” features a projected film loop of black and white images, alongside a stellar group of string players in an appeal for the need for peace in a time of war. Quadranga (2004) is a trio for amplified strings that rewrites the musical form of the popular Afro-Latin dance the Charanga. Preceding this performance will be the screening of three recent video works--Grading Tips for Teachers (2001), Hart (2001) and Tony’s Oscular Pets (2003) -that humorously echo Conrad’s ongoing engagement with themes of discipline and control.

Related Conrad film, video, and lecture events will be held from May 19th-22nd at Anthology Film Archives. Please consult www.anthologyfilmarchives.org for more information.