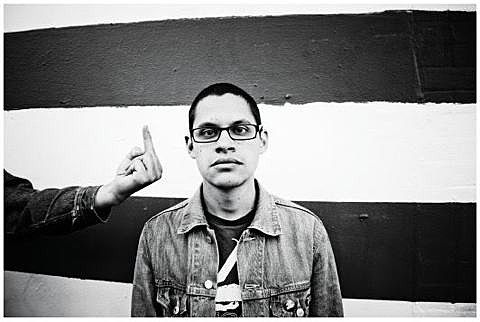 Oakland's Tony Molina has been in bands for over 10 years (Dystrophy, Ovens, Caged Animal among them), swerving between hardcore and pop. The latter has been the focus of Molina's last couple releases which recall the catchy, crunchy pop of early-'90s Teenage Fanclub and Weezer, albeit with "ch-chunk" metal riffage and twin lead solos thrown in. Monlina knows how to pack a punch too: few of his songs hit the two-minute mark but he still makes room for verse/chorus/bridge/solo/chorus structure.

Molina released a six-song 7" last year as part of Matador's Matador Records' "Singles Going Home Alone" series. He also released the 12-track, 11-minute Dissed & Dismissed 12", originally a very limited release but is getting reissued by Slumberland on March 25. You can stream two songs from it below.

While Tony Molina hasn't announced a tour, he will play LA's The Echo on March 10 and then immediately head to Austin for SXSW. So if you're going to that, look out for him there.