Maynard and one of his wines 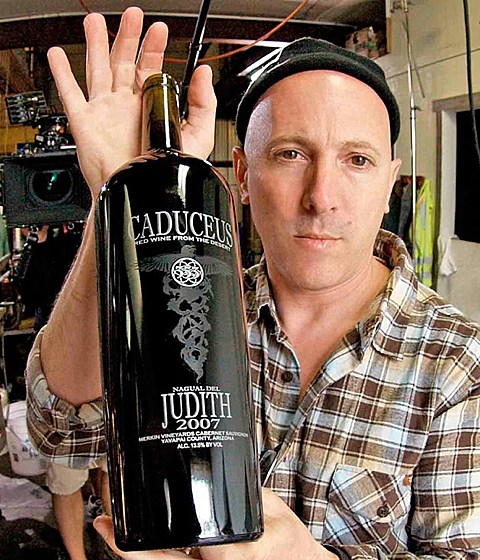 Tool are heading out on tour in early 2016, and they'll be joined by another long-running eccentric alt-metal band, Primus. It's their first major tour since 2014, and so far only 8 dates have been announced, which will take them through some west coast and southern cities, with the implication of more to come. Industrial band 3TEETH are opening. All currently known dates are listed below.

Hopefully a NYC date is on the way, but meanwhile Tool singer Maynard James Keenan is on tour now with his other band Puscifer and hitting NYC TONIGHT (11/17) at Terminal 5. Tickets for tonight's show are still available. They just released their new album Money Shot at the end of October and today they put out a video for its song "The Remedy." Check that out, with their list of tour dates, below.

Tool (well, mostly just Maynard) have been in the news for other stuff lately as well. They only played one show in 2015, a Halloween event during which they dressed up as and covered Led Zeppelin, playing their version of "No Quarter" for the first time since the '90s. Check out a video of that below.

There have also been conflicting reports about the possibility of a new Tool album, and while nothing has been stated explicitly, it seems like that might be a thing. Maynard, a busy man, is sick of being asked about it though, asking Rolling Stone if he "seems like a lazy person" and recently calling Tool fans "insufferable" and "retards" for being too serious about the possibility of new Tool music. He is also helping to work on an authorized biography of himself that is due out in 2016. He also makes wine.

Tool's "Aenema" is also one of Grimes' favorite songs. She's in NYC as we speak, having played Terminal 5 last night, and she's playing MHOW on Wednesday but has tonight off. Maybe she's going to the Puscifer show. Or maybe she's seeing her tourmate Nicole Dollanganger's show at Baby's.

Check out Puscifer's "Money Shot" video, footage of Tool as Led Zeppelin, a video of Maynard talking wine with Tim and Eric, and tour dates, below...