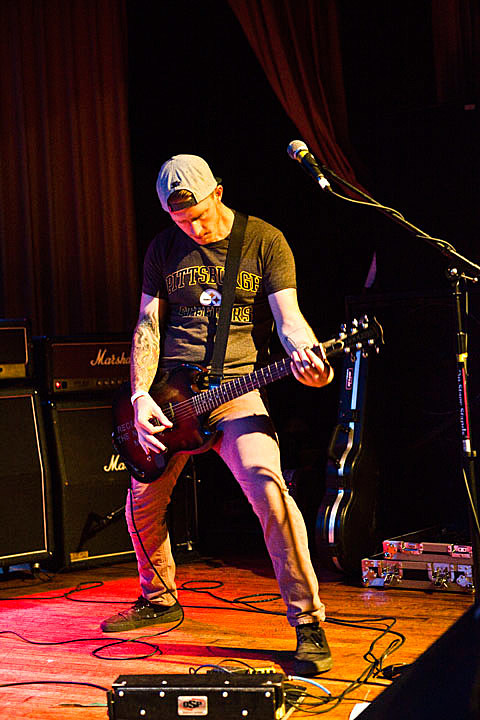 Much like in years prior, in addition my own favorites list of 2012 I sought out lists from some of my favorite artists as well including members of Loss, Coke Bust, Witch Mountain, Magrudergrind, and much much more. We already posted lists by Eugene Robinson of Oxbow and Curran Reynolds of Today Is The Day, and we posted Trevor De Bruaw of Pelican on BV Chicago. Check out more lists of the best of 2012 according to select metal/punk/hardcore bands below.

RJ Ober of Magrudergrind, best non-punk/metal releases of 2012
Action Bronson - Blue Chips/Rare Chandeliers
Why pick one? Put anyone, let alone Alchemist, behind this dude and he's gonna beast out.

Andy Stott - Luxury Problems
With only a hint of the suffocating terror of last year's Passed Me By and We Stay Together, this one still feels like music from another planet, albeit a sexier, more ethereal planet.

Kendrick Lamar - Good Kid, m.a.a.d City
Somehow we're living in a time when this is what plays on Hot 97, and we could do a lot worse.

Swans - The Seer
To say this is a synthesis of every epoch of Swans doesn't do it justice. A beautiful throbbing, oversized, violent cave of sound. Thankfully their MHoW got rescheduled.

John Talabot - Fin
How you can make a record that feels like house music but completely obliterates the notion of genre is beyond me. This record makes me want to dance and I have no business dancing.

Burial - Street Halo/Kindred
I don't think I know what dubstep is anymore but I'm pretty sure someone lumped Burial in with that mess at some point. Fuck that. This is everything that is not: a collection of understated, muted, gorgeous sounds that never shows its full hand.

Joey Bada$$ - 1999
Nothing that hasn't been done before, just done better and done by a teenager. Addictive flows over a lot of beats that should have been his in the first place.

Chromatics - Kill For Love
I didn't want to, but if I'm going to be honest with myself this one has to be here too. Doesn't really play like a cohesive LP, but that doesn't preclude Kill For Love from containing two of the most unstoppable tracks I heard this year. 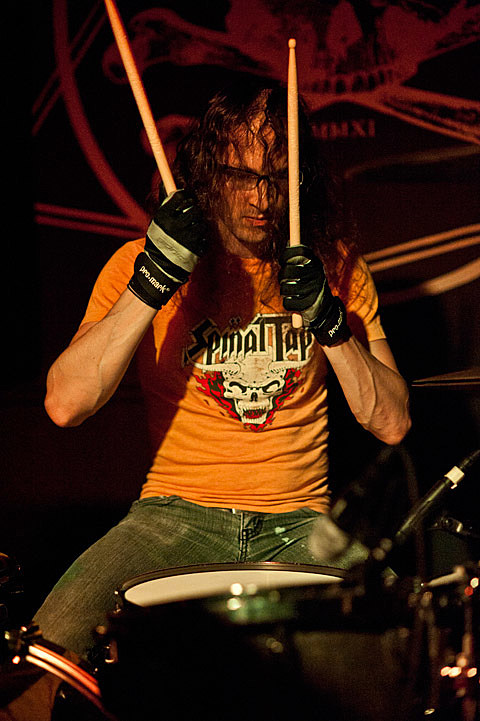 Nathan Carson of Witch Mountain, Best of 2012
13 Cities that I played in 2012 for the First Time Ever...
As Brian Wilson said, "I get around." But this year marked the most extensive touring that Witch Mountain has done to date, so I ended up marking some new territory.

1. Centralia, WA 4/27/12 - This was a lot like the "Rawhide" scene from the Blues Brothers. A real small cowpoke town in central Washington. A dive bar/diner with a four foot stage run by doom metal heads with hearts of gold. Local band was awful, and both our vehicles got pulled over on the way home. I got my first breathalyzer test. Blew a .006 and got sent home scott free.

4. Toronto, ON 6/13/12 - Epic night as we shared the stage with our friends Blood Ceremony and Castle. The cops came and turned us down. In the US, police pull the plug on loud shows. But those polite Canadian mounties just asked us to bring it down a notch.

5. Rochester, NC 10/24/12 - Strangely enough, a local cop showed up at this gig too. Only this officer friendly was a fan, rocked out, and bought our new album. Great roast duck at the Vietnamese place across the street from Bug Jar too!

6. Hamilton, ON 10/26/12 - One of the worst gigs we played this year, and I entirely blame the promoter, who disappeared like a fart in the wind the second we were done playing. The bar still paid us, but we were left comparing Hamilton to even worse places, imagining potential future album titles like Hamilton Awaits, or Highway to Hamilton.

7. Ottawa, ON 10/27/12 - It was Halloween weekend, and this promoter did her job. Kick-ass show with special shout out to our friends in Monobrow and the amazing Muffler Crunch. Even better was the reception we got from the local radio DJs that took us back to their family home for refreshments and laundry.

8. Montreal, QC 10/28/12- Our first stop in Montreal back in June was a total bust. But the follow-up gig at Katacombes in October was sheer delight. The place looks like HR Giger designed it, with a central pillar of skulls and a spinal column on the bar. Great local bands (check out Show of Bedlam!) and great sound. It was Rob Wrong's birthday too.

9. Burlington, VT 10/29/12 - Apparently Nectars is the club where Phish made its name. Anyway, it was packed and we played well, but the vibe of the night was absolutely ruined by the nu-metal DJ. At least there were gravy fries...

10. New Haven, CT 10/31/12 - Halloween night, and we made a run to Walmart on they way there to get the cheesiest costumes we could muster. I was a gangster with a fedora and pinstriped zoot-suit, Neal had dreadlocks and a toga, Rob had a metal mask and vampire cape. And on lead vocals--Darth Uta. Also, the pizza was very very good. Too bad it was one of those venues where the bouncers practically carry you off stage so the dance party can start...

11. Worcester, MA 11/1/12 - "Woostah!" Wow, this place had been described to us as similar to the bar from Dusk Til Dawn and I cannot argue. Very lively crowd in a very rustic setting. My only complaint is that the Galaga machine cost 50 cents.

12. Asheville, NC 11/5/12 - Static Age records is a classy vinyl shop in a cute college town. I assume there are other sorts of towns in North Carolina, but I haven't been to any. Behind the back wall there's a tiny stage, perfect for the packed crowd we had on this Monday night. They wouldn't let us stop playing! Oh and I totally scored a Harold Budd record there. Rad.

13. Fullerton, CA 11/14/12 - Certainly one of the highlights of our tour was playing the Slidebar in Fullerton. Actually friendly security in that place (unless you're the drunk guy that got thrown out of our sound check). Was a real pleasure to finally play with Ides of Gemini. Wino came out to see us too. And the crowd was fantastic. In many ways, this was the finale of our year. 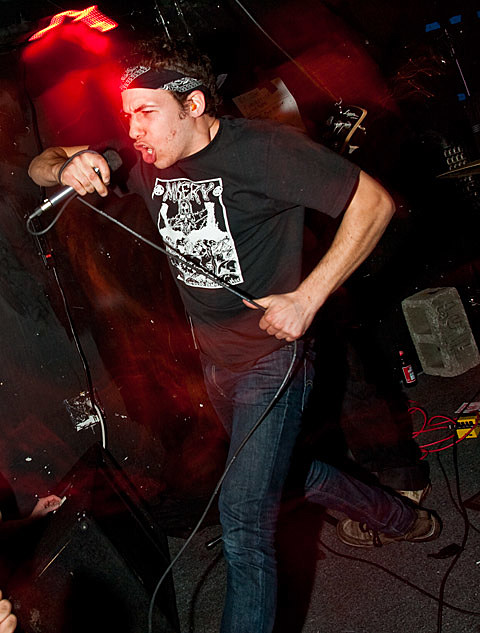 ---
Evan Patterson of Young Widows / Old Baby, best of 2012
Experiences:
Lying on a cliff and watching the moonrise over the mesas at Monument Valley.
Santa Fe, NM and my desert flower.
My first all covers performance as The Troggs.
Old Baby sharing the stage with Mike Watt and the Missing Men.
24 hour notice Young Widows pop-up show with Shannon Wright.

---
Jim Vrdrbr of Urfaust, Best of 2012
Satan's Satyrs-Wild Beyond Belief : Vinyl
Punk n Roll sleaze filth with nasty hooks and cuts! Fucking love this shit... Didn't knew it before, until I stumbled upon them through the amazing world of internet. This is how I like my drinking music: the soundtrack to any night of Intoxication!

Svartidauði - Flesh Cathedral : Cd
This is one hell of a sick monster! We had the honor of doing a couple of shows with them in Iceland and in Germany. Total crushing, sick and twisted Black Metal to the bone! A fist in the face of God, total Mayhem and Destruction! If you thought that their recordings are impressive: check them live when you have the chance.... This is a force to be reckoned with!

Those Poor Bastards - Behold the Abyss : Vinyl
As being a huge fan of Those Poor Bastards for a long time, I could;t wait to get this piece of vinyl on my player. I didn't listen to anything before I bought, I just wanted to listen to it and see if they could manage to get a sicker atmosphere than their previous records: They succeeded... Nothing more to add!

Best show of 2012 for me was easy: MENTORS at Vera, Groningen (The Netherlands)! I could not believe at first that MENTORS was doing a show in my hometown! And apparently, so didn't many others since there where sonly 25 people around (including the staff of the place)... My hopes weren't to big, but hell: they where excellent! The sound of the evening was superb, the band played really tight as hell, which was something considering the fact that Sickie Wifebeater was missing due a hand injury. One of the Hammerhawk guys filled in on guitar. They've played all their hits and did tons of encores! The retarded girls dancing on stage where the icing on the cake... 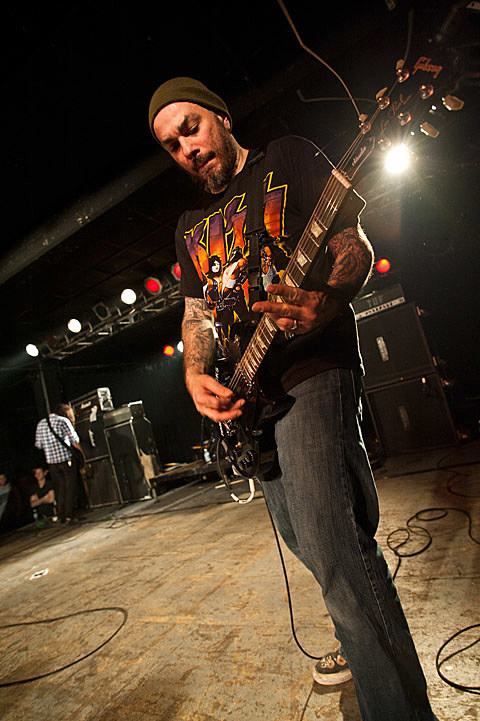 Domenic Romeo (A389 Recordings), Top Ten Of 2012
1. My wife, children, cats and friends.
2. All things A389
2. EYEHATEGOD
3. KISS circa 1978-1982
4. Filling in on guitar for RINGWORM over the summer
5. All things ILSA, ISLA or LISA
6. FULL OF HELL live
7. Rediscovering THE UNDERTAKER AND HIS PALS
8. GEHENNA Rawwar demos
9. LEFT. FOR. DEAD.
10. DEVELOPING NATIONS STUDIO/Baltimore's hottest hipster: Kevin Bernstein