Steve Brooks of Torche at The Charleston (more by Samantha Marble) 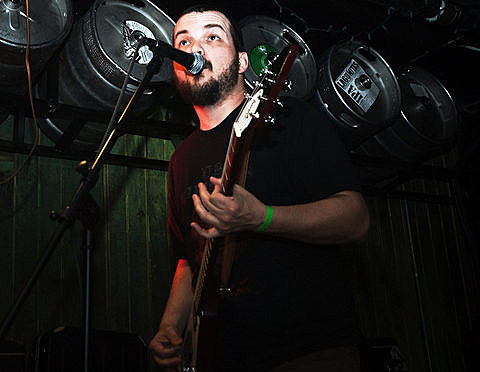 Torche will hit the road with Big Business and Helms Alee for a US tour that kicks off in Texas in July and swings into Music Hall of Williamsburg on July 20th. Ticket info is forthcoming. All dates are listed below.

The NYC date is a shade more than three months after Steve Brooks (Torche) will hit the same venue with his other outfit, Floor. They play MHOW on 4/13 with Magrudergrind & Hawks. Tickets are still available.

Torche recently announced that they are a trio no more!

Tilts vocalist/guitarist Andrew Elstner is joining the well-regarded stoner-metal band Torche. The latter group, which has members in Atlanta, Gainesville and Miami, has known Elstner since he was the vocalist/guitarist for Riddle of Steel. When that band ended a few years ago, it coincided with Torche splitting with guitarist Juan Montoya.

"[Torche] singer/guitarrer Steve Brooks found out I was a free agent, and we've been in touch ever since," Elstner says. "He's also a big fan of Tilts too, so we'd been trying to coordinate a jam/hang session for a long time and scheduling has been tough."

That session finally happened this week in Gainesville, Florida -- and by all accounts, it went well.

"It's been sleep, eat, jam since I got here," Elstner says. "Surreal and awesome."- [River Front Times]

That "jam session" is more than that, as the band worked out ten new songs for a forthcoming LP. No word on that record, but look for it soon.

In also related news, Melvins (which features all members of Big Business) are playing some classic LPs over two nights at Music Hall of Williamsburg, and tickets are still available for June 6th featuring Lysol, Eggnog, and Houdini in its entrety, and June 7th featuring Bullhead & Stoner Witch (tickets).

Right next door to Floor on the same night, you can catch The Ocean at Public Assembly with East of The Wall & Flourishing.

All Torche dates and some video is below.