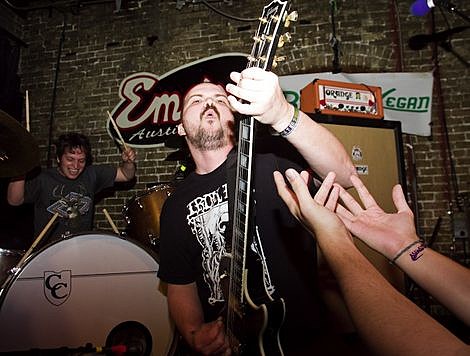 When we woke up [Saturday] morning there was a frowny face text from Stevo saying Torche's van was broken into overnight while in Chicago, and piles of shit was stolen....needless to say, it hasn't been a good day for them. We're getting a full listing from them of what was stolen, but the quick rundown is that equipment, guitars, laptops, passports, personal belongings and, sadly, more was taken. They are out with Coheed and Cambria this month, and unfortunately had to cancel [last nights] show in Detroit, and are also forced to cancel the Canadian dates as well due to passports having been stolen. While C 'n C is in Canada, Torche is already sorting out potential DIY gigs in the states...tentatively for Vermont, Providence, and Wilkes-Barre, PA. We will have updates on these (presumably) basement shows the second we get them from the band...(which pretty much means we'll have an update for you an hour before they play the shows;)

Many of you have emailed us and the band about donating to help the band through this stretch. You guys are all sweet and thoughtful, THANK YOU. The band ain't livin' large, and although this Coheed tour is a chance to play in front of a shitload of potential new fans, its still a very hand to mouth touring commitment for them. That's the round about way of saying that these boys could use any love right about now.
- [Hydra Head]

Frowny face indeed. If you would like to help out Torche, a paypal donations email address was set up: TLCforTorche@gmail.com. Torche is scheduled to be at Rumsey Playfield in NYC on 5/26 on that Coheed & Cambria tour (tickets), and Steve Brooks will be back in NYC a month (to the day) later at Europa with his old band Floor (tickets).