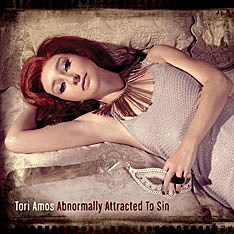 "Tori Amos has announced her "Sinful Attraction Tour" in support of her forthcoming album Abnormally Attracted to Sin, in stores next Tuesday, May 19. The tour will launch this July in Seattle, with dates across the US.

Known for her dynamic live performances and ever-changing set lists, Tori is one of the most active touring artists in the world, having played over 1,000 shows since her first world tour over a decade ago.

The groundbreaking singer/songwriter will release her Universal Republic debut album, ABNORMALLY ATTRACTED TO SIN, on May 19, 2009. A DVD of corresponding 'visualettes' for each track will accompany the deluxe version of ABNORMALLY ATTRACTED TO SIN. These interlocking episodic films bring to life the narrative arc of the album. The footage was captured over the past year and shot with a noir twist in HD and Super."

One of those "visualettes" (video), and all dates (Radio City Music Hall) below...


Fire to Your Plain - Tori Amos