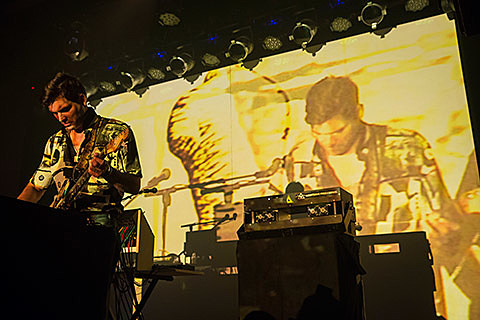 Torn Hawk is the moniker of Brooklyn's Luke Wyatt, who makes instrumental electronic music with chillwave-style nostalgia but a knack for more experimental sounds too (he namedrops Sonic Youth, Glenn Branca, Philip Glass, and Steve Reich as formative influences). He's also got equally nostalgic videos which splice together old '80s VHS clips. You can watch some of those below.

We just caught Torn Hawk opening for Panda Bear in Brooklyn this past weekend, and his next show here will be headlining Cameo on Tuesday (5/27) with Regal Degal, Future of What and Limited. Tickets for that show are on sale now. He also has a couple European dates happening in September, which are listed below.

Doing visuals for Torn Hawk at that show was another NYC electronic artist Ari Russo, or just Russo, who also records for Torn Hawk's Valcrond Video label. His new EP, Wild Metals, comes out on that label on June 19. You can watch the video for one of its tracks, "Purple Earth" (also with very '80s clips) below, and download another track, "Zishethe," above via XLR8R.

List of Torn Hawk dates, with those videos, below...

Torn Hawk - "Through Force of Will"