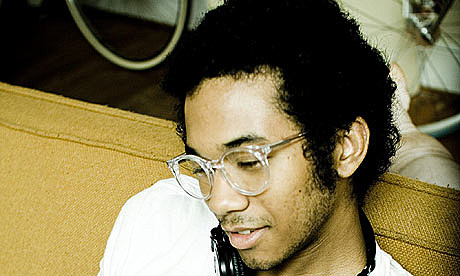 The Islands and Jemina Pearl tour is almost over. The NYC stop of the trek just one day away. It happens at Bowery Ballroom on 11/5 (tickets), and playing first of three at that show (like he did on the whole tour) will be Toro Y Moi aka Chaz Bundick...

Toro Y Moi, is the brainchild of South Carolinan Chaz Bundick, a 23-year-old singer, songwriter, producer, multi-instrumentalist whiz-kid and graphic design graduate who grew up in New York with a Filippino mum and African-American dad listening to everyone from Daft Punk to J Dilla, and everything from freak-folk to French House - he's also got a dance alias, Les Sins. Bundick is apparently working on two different Toro Y Moi albums for release in 2010, and maybe Blessa and 109 represent the two extremes he'll go to on those two records. Whatever, expect lots of funk bass and fuzztone indie, and plenty of somnolent keyboard pop with a budget-lavish sheen, wafting beautifully but hazily out of your speakers like a weak radio transmission from a parallel universe where Kevin Shields was executive producer of Pet Sounds ... [Guardian]

As seen on Gorilla Vs Bear, Stereogum, Pitchfork and elsewhere, grab a bunch of MP3's above.

Also up there is the first single off Jemina Pearl's new album ("Break it Up") which also happens to be a duet with Iggy Pop. Jemina "friend of legendary rockers" Pearl is also opening for her friend Thurston Moore's band Sonic Youth at MHOW on Nov. 24th. All dates below...