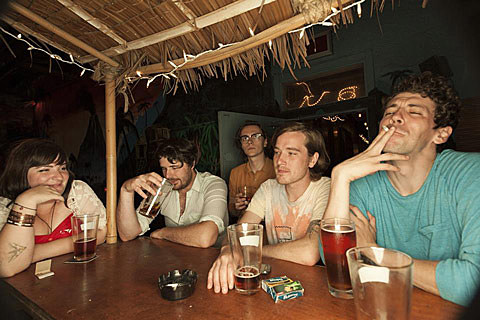 Jesse James Laderoute is a maintstay in the quirkier side of Toronto's music scene, having played drums for Slim Twig, collaborated with Ell V Gore, and his own band Young Mother. Another of his projects is Blonde Elvis who make off-kilter glam somwhere between Brian Eno and Pulp. Blonde Elvis' 2012 EP was basically Laderoute solo but it's now become an actual band who have just started to record. They released "Slow Fall on Egypt" earlier this year and their second 2014 single is the terrific "Fit for Her," a midtempo stomper with heaps of attitude and a rousing chorus. The song's video was directed by Paul Hanlon and involves interviews he did with people about their childhood aspirations, plus famous folks coerced digitally to mime the chorus. The video makes its premiere in this post and you can watch it below.

Blonde Elvis will dip below the border this weekend, visiting NYC at the soon-to-close Death by Audio on Saturday (10/4) with A Rex & J Rex, Sam Coffey & The Iron Lungs, and headliners Las Rosas. They'll be back again on October 22 at Palisades with Wish and fellow Canadians Beliefs.

Those are the only two shows on Blonde Elvis' schedule. New video plus a few other Blonde Elvis streams below..

Blonde Elvis - 'Fit for Her"