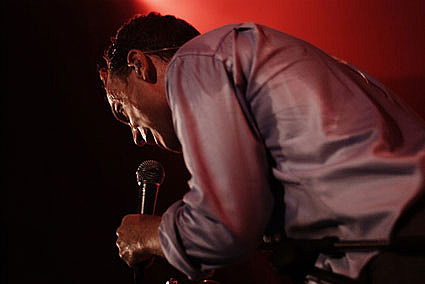 hi guys...well i know i'm gonna regret this, but i can't help myself. I just heard Ben Folds, who many of you prolly have never heard of because you don't waste your time listening to shitty mid nineties m.o.r. lite grunge, calling my friend Charles Spearins' BEAUTIFUL new record "bad spa music" on the CBC. BEN FOLDS! insulting CHARLES SPEARIN! is he fuckin' nuts? you come to our country and insult a national treasure on the radio? CHARLIE SPEARIN????? the most beautiful talented soulful brother in the whole world? a guy who has written some of the most influential, sublime music this side of heaven? WHo has just completed the Happiness Project, one of the most original and uplifting pieces of music i have EVER HEARD? Ben Folds, ladies and gentleman, is an ASSHOLE for dismissing this extraordinary tribute to life and love as "bad spa music". It makes me wanna......well you know.....kick his scrawny, washed up hipster doofus ass....but instead, i encourage you all to write to his myspace (he could use the visits) and imbed charles' music in your message so that every time some refugee from the nineties wants to hear their favourite ben folds ditty, they get charlie instead. i've said it before, and it feels right, so i'll say it again;
BEN FOLDS IS AN ASSHOLE.

Wiki say, "Charles Spearin is a Canadian musician. He is a founding member of Do Make Say Think. Along with Kevin Drew, he formed KC Accidental. He also contributes to Broken Social Scene and Valley of the Giants. He is easily recognized on stage by his trademark moustache. His newest album The Happiness Project [was] released on February 14th, 2009 on the Arts & Crafts Label."

Charles Spearin is playing the Wordless Music Series at Le Poisson Rouge on March 15th. Tickets are on sale. Others on the bill will be playing the music "of Stravinsky and Stockhausen". All dates and a video below...