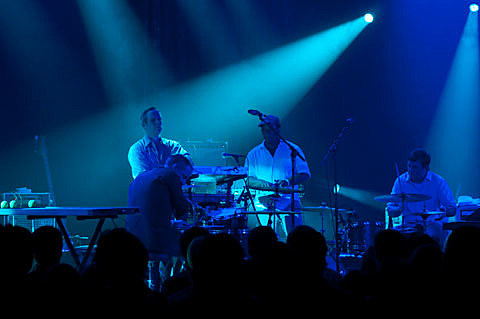 Chicago label Thrill Jockey Records, who focus most heavily on experimental music and indie rock, will be celebrating their 20th anniversary in NYC on September 15 at Webster Hall with a stacked lineup of Tortoise, Future Islands, Matmos, Liturgy, and D. Charles Speer & the Helix. Tickets for that show go on sale Thursday (7/19) at noon.

Meanwhile, Liturgy will play NYC even sooner with an also very solid, but very different lineup of Sepalcure, Machinedrum, White Ring, and MikeQ on Saturday (7/21) at 171 Lombardy in Brooklyn. Tickets for that show are on sale now. As discussed, Liturgy also plays the Basilica Music Festival in Hudson, NY (Aug 11-12) with Mick Barr, Gang Gang Dance, Prince Rama, and more.

Lists of all Tortoise, Future Islands, Liturgy, and Machinedrum dates, and videos from all the bands are below...

D. Charles Speer & the Helix - "The Angel of Death"