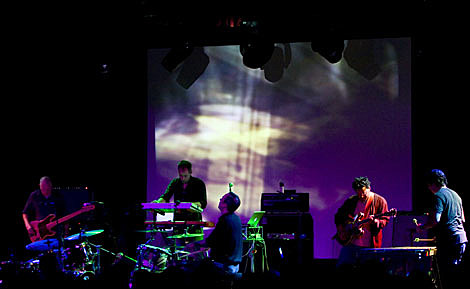 Instrument-driven Chicago post-rockers Tortoise have announced a NYC show happening a little less than a month before the release of of their forthcoming LP, Beacons of Ancestorship, out June 23rd on Thrill Jockey. The Saturday, May 30th gig at the Bell House in Brooklyn is just one of four performances currently on the band's schedule. Bird Show is opening, and tickets are now on sale.

While in NYC, Tortoise will also make an appearance at the previously mentioned Bang on a Can Marathon happening at the Winter Garden in the World Financial Center in Manhattan on May 31st (free).

The band's other dates include a May 29th show in Buffalo, NY and a July 17th appearance at the Pitchfork Festival in Chicago, where the group will play the fest's "Set Lists by Request" evening on Friday. Stay tuned for more dates to be announced.

Beacons of Ancestorship will be Tortoise's first proper album since 2004's It's All Around You. The new album's first track, "High Class Slim Came Floatin' In," will be included on the Thrill Jockey Record Store Day comp, Records Toreism . The LP comes out on Record Store Day (April 18th) and is limited to 900 copies. Also, "the band will be releasing a series of 5" records following the album's release."

"A characteristic Tortoise album is one that traverses an encyclopedia of styles and reference points, a document of where musical intersections and dialogue are occurring at a given moment in time. Beacons of Ancestorship is no different, with nods to techno, punk, electro, lo-fi noise, cut-up beats, heavily processed synths, and mournful, elegiac dirges. We see these ideas working out in compositions like "High Class Slim Came Floatin' In," an eight-minute track which playfully references the world of ecstatic rave and dance culture with a curiously ambivalent, multi-part suite overlaid with robotic, machine-sounding melodies that stop and start in several different time signatures before the song's ultimate resolution; and again in "Yinxianghechengqi," which begins as a straightforward uptempo math-rocker before steadily accelerating into a wall of fuzzy atonal sqwonk."

All tour dates, Beacons of Ancestorship track list, and video of Tortoise from last year's All Tomorrow's Parties in Upstate NY below...