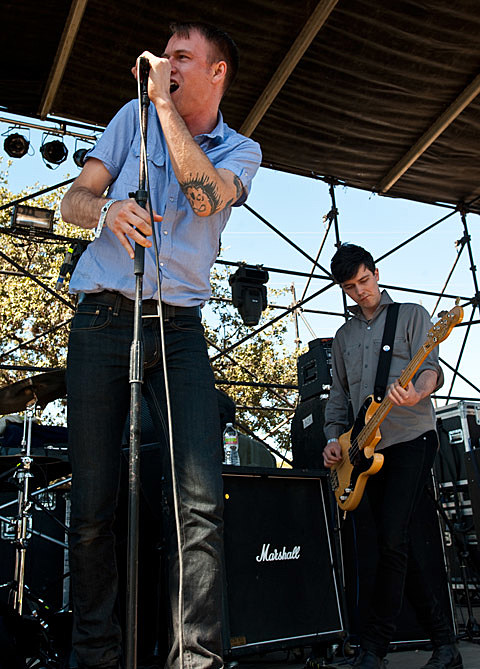 Yesterday news broke that UV Race were heading out on the road as part of a tour toward Chaos in Tejas. Part of those dates were with the great Total Control, though the band were not involved in the UV Race show scheduled in NYC for that week. (TC is some of UV Race plus Mikey Young of Eddy Current Suppression Ring.) Now comes word that an NYC show has indeed emerged for Total Control, and the bill is a whopper! Look for the band to headline 285 Kent on May 23 with Raspberry Bulbs, Crazy Spirit and Survival. $10 gets you in.

If you haven't checked out Total Control's recent 7"s (compiled into a single digital release) and their incredible 2011 LP Henge Beat you can stream some of those below.

Bill wrote in the post about Mikey Young's other other band, Oooga Boogas, "Trying to keep up with Eddy Current Suppression Ring-related bands can be a fulltime job." Now comes word of yet another related project, Lace Curtain, which is "James, David & Mikey from Total Control, Rat Columns, Rank/Xerox, Eddy Current Suppression Ring et al." Lace Curtain (singular) are not to be confused with Lace Curtains (plural) which is Michael Coomer of Harlem's band. Though it is confusing. Anyway, Lace Curtain have an EP coming out on DFA Records next month and can be pre-ordered here and you can stream samples over at Juno.

Updated UV Race/Total Control dates, plus those TC streams, are below.